Faf du Plessis' team bounced back in IPL 2022 after a string of defeats and this win puts them within the top four with 12 points from 11 games. Meanwhile, it was CSK's seventh loss in 10 matches. 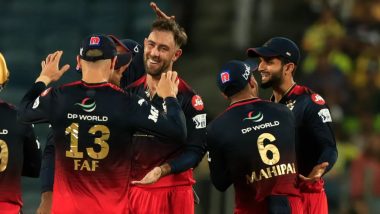 Royal Challengers Bangalore returned back to winning ways with a 13-run victory over Chennai Super Kings at the MCA Stadium on Wednesday, May 4. With this victory, RCB have entered the top four and ensured that their playoffs qualification hopes remained alive. Harshal Patel (3/35) was RCB's star with the ball as he took three important wickets to ensure his side broke their losing streak against the defending champions. Woman Proposes to Boyfriend During RCB vs CSK IPL 2022 Clash at MCA Stadium, Pictures Go Viral

Chasing 174, Chennai Super Kings got off to a great start with a 54-run opening partnership between Ruturaj Gaikwad and Devon Conway. The duo continued their great form from the last match but Gaikwad's departure in the seventh over brought RCB back into the game. Conway continued the good work he has been doing since the last game as he scored a second consecutive fifty. But he could not keep going with Wanindu Hasaranga getting rid of him. Glenn Maxwell (2/22) turned out to be RCB's hero as he dented CSK's chase with the wickets of Robin Uthappa (1) and Ambati Rayudu (10).

Moeen Ali kept CSK in the game with 34 runs off 27 deliveries but his dismissal in the 18th over almost sealed the result against their favour. And the outcome was confirmed when MS Dhoni departed in the 19th over.  Josh Hazlewood also bowled well with figures of 1/19.  Earlier, RCB got off to a great start with Virat Kohli and Faf du Plessis scoring 62 in 7.1 overs. But after the quick dismissals of du Plessis (38), Kohli (30) and Maxwell (3), it was Mahipal Lomror (42) and Rajat Patidar who steadied the ship before Dinesh Karthik's (26*) late fireworks propelled RCB to 173/8.

Royal Challengers Bangalore will aim to keep up with this momentum when they take on Sunrisers Hyderabad on May 8. Meanwhile, Chennai Super Kings will look to bounce back from this loss when they face Delhi Capitals on the same day.

(The above story first appeared on LatestLY on May 04, 2022 11:47 PM IST. For more news and updates on politics, world, sports, entertainment and lifestyle, log on to our website latestly.com).