RIP Dean Jones: Former Australian Cricketer Shutting Down Internet Troll With a Savage Response Just a Day Before His Sudden Death Is How Fans Will Remember Him! 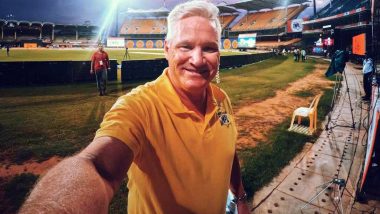 Former Australia cricketer Dean Jones has died on September 23, 2020 (Thursday) after a cardiac attack. The 59-year-old was currently in Mumbai fulfilling his commitments as one of the commentators for the host broadcasters of the Indian Premier League 2020 which is taking place in the United Arab Emirates. The cricketer-turned commentator was a witty person and him shutting down a troll on social media just a day before his death is how cricket fans will remember him. Dean Jones Dies Due to Cardiac Arrest in Mumbai, Australian Cricketer-Turned-Commentator Was 59.

Dean Jones was part of the Star Sports commentary team covering IPL 2020 and was in a bio-secure bubble in a seven-star hotel in Mumbai. The former Australian cricketer was recently criticized by a fan on social media calling him the ‘most annoying commentator ever’ and urged the broadcaster to sack him immediately.

'Dean Jones is the most annoying commentator ever. Seems like a very annoying person as well. @StarSportsIndia needs to dismiss him ASAP, else the #IPL2020 needs to be watched on mute.' the social media user wrote in his tweet, which has been deleted now.

Dean Jones, however, handled the situation in his own manner, giving the troll a fitting reply. The former Australia cricketer response must have left the Twitter user red-faced as the Australian asked him to watch IPL 2020 on mute.

Dean Jones played 52 Test matches scoring 3631 runs at an average of 46.55. With a 216 as his best score, Jones scored 11 centuries and was an important member of Allan Border's team. Jones also played 164 ODIs and scored 6068 runs with the help of seven centuries and 46 fifties.

(The above story first appeared on LatestLY on Sep 24, 2020 04:27 PM IST. For more news and updates on politics, world, sports, entertainment and lifestyle, log on to our website latestly.com).