The SA vs WI clash will be played at the Dubai International Stadium on October 26, 2021 (Tuesday). The SA vs WI encounter has a start time of 03:30 pm IST (Indian Standard Time) with toss taking place at 03:00 pm. 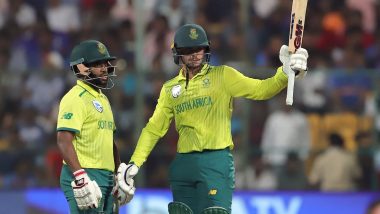 South Africa and West Indies meet in the match 18 of the ICC T20 World Cup 2021. Both the sides come into the contest having lost their respective first matches. While South Africa lost to Australia, West Indies were outplayed by England. Meanwhile, both the sides will be looking to register their first winning points in the tournament. Given that both the teams lost their opening matches, this match is important for both West Indies and South Africa. ICC T20 World Cup 2021 Schedule in IST, Free PDF Download Online.

In terms of head-to-head records in T20Is, both sides have played each other for a total of 15 times where South Africa have the upper hand with 9 wins as compared to New Zealand, who have won the remaining six games.

The key players for South Africa would be Rassie van der Dussen and Tabraiz Shamsi whereas for West Indies, Andre Russell and Akeal Hosein could turn out to be important performers in this match. ICC T20 World Cup 2021 Points Table, Super 12: Afghanistan Topple Pakistan to Lead Group 2 Standings.

In this match, the clash between Lendl Simmons and Kagiso Rabada would be an interesting one to watch along with the duel between Quinton de Kock and Ravi Rampaul.

The SA vs WI clash will be played at the Dubai International Stadium on October 26, 2021 (Tuesday). The SA vs WI encounter has a start time of 03:30 pm IST (Indian Standard Time) with toss taking place at 03:00 pm.

Fans can live telecast the South Africa vs West Indies match live on Star Sports channels. The SA vs WI match in T20 World Cup 2021 live telecast will be available on Star Sports channels in English and well as regional commentary languages. Fans looking for how to watch the SA vs WI live streaming online can watch the match live on the Disney+Hotstar app as well as on the website. Fans watching the live streaming online on Disney+ Hotstar will have to pay a nominal fee and subscribe to catch the live-action.

(The above story first appeared on LatestLY on Oct 25, 2021 11:08 PM IST. For more news and updates on politics, world, sports, entertainment and lifestyle, log on to our website latestly.com).