Shahid Afridi Age: Former Pakistan Captain Comes Up With a Cheeky Response After Fan Wanted to Know His Real Age 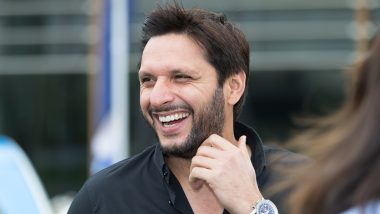 Shahid Afridi recently held #AskAfridi session on Twitter. The former Pakistan captain answered many questions ranging from his favourite cricketer to favourite movie. Afridi was even asked to pick better captain between India's MS Dhoni and Australia's Ricky Ponting. The former Pakistan all-rounder rated Dhoni over Ponting. Among the interesting questions, Afridi was asked about his age. And the all-rounder came up with a hilarious response. In the past, Afridi has been in a controversy related to his real age. Shahid Afridi Rates MS Dhoni As Better Captain Than Ricky Ponting During #AskAfridi Session on Twitter.

As Afridi was asked about his age, the former Pakistan cricketer wrote, "Age is just a number my friend," and added blushing face emoji to his response. The mercurial all-rounder left the fan and other followers guessing.

Age is just a number my friend 😊

The all-rounder, who plays for Multan Sultans in the Pakistan Super League (PSL), then made a u-turn and cleared the year of his birth as 1977 and not 1975 as published in his book. "It was a mistake by the publishers and copy editors. In the second edition of the book, the correction has been made," Afridi had said.

Afridi's year of birth continues to be 1980 on various cricket-related websites and on as per ICC's records as well. And the confusion regarding his real age remains!

(The above story first appeared on LatestLY on Jul 30, 2020 12:03 AM IST. For more news and updates on politics, world, sports, entertainment and lifestyle, log on to our website latestly.com).