Sunil Narine Has Worked on ‘Hiding’ the Ball From Batsmen: Carl Crowe 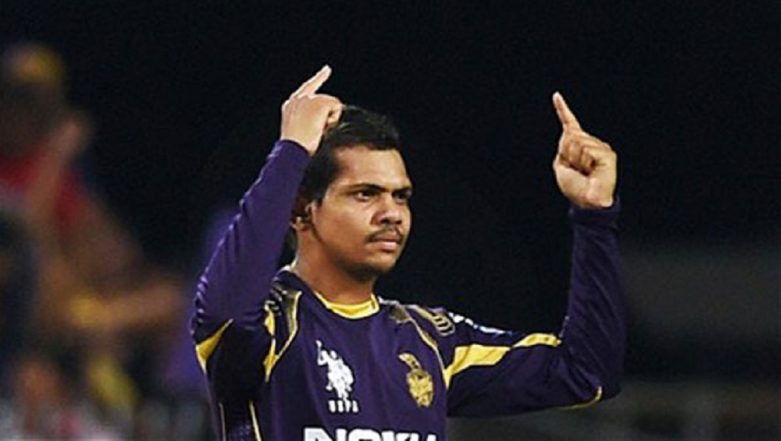 Kolkata, March 19: Sunil Narine, Kolkata Knight Riders' key spinner, has worked on "hiding" the ball from batsmen to keep the mystery despite the scrutiny of his action, spin bowling coach Carl Crowe said, here on Tuesday. Crowe helped West Indies' Narine bounce back after being suspended several times for suspect action. Asked about batsmen reading his 'mystery' with so much technology around, the 43-year old said since last year Narine changed his action and is still working on it. "With so much analysis, we are aware of that (the mystery being solved). His action changed slightly since last year in terms of hiding the ball," Crowe said ahead of KKR's practice session at the Eden Gardens.

"We are working on him in terms of staying ahead of batsmen. After IPL, we have plans for next year with mystery ball, hiding the ball. We are one step ahead of them and are looking at new ways to hide (the ball) and make sure batsmen don't pick up," he said. Narine picked up 17 wickets from 16 games last season, helping the Dinesh Karthik-led KKR reach playoffs for the third time in a row. IPL 2018 Awards: Rishabh Pant, Sunil Narine Take Home Most Awards; Check Complete List.

Crowe said despite Narine not featuring in the Pakistan Super League (PSL) this season due to a finger injury, the 30-year-old off-spinner is in fine fettle. "He is in good shape. He didn't play the PSL due to a finger injury. His performance has always been of high quality. His batting is now part of his game as well. But when you modify your action and be able to maintain the standard, which he has done, credit should go to him."

On Narine playing the World Cup for the Windies despite not being part of the team since 2016, Crowe said: "In terms of the last World Cup, he wasn't ready. He hasn't played a great deal of 50-over cricket for a while. He wants to play for the West Indies. It is something we are aware of and looking forward to". On chinaman bowler Kuldeep Yadav, Crowe said the 24-year old's attitude to stay unfazed in pressure situations is the key to his rapid rise. "I have been around KKR now for 2-3 years and it's been quite a bit of time working with Kuldeep and seeing his progression. One thing that struck me is how grounded he is. How calm he is," the bowling coach said.

"Kuldeep has big heart. He is prepared to get hit. Even the best in the world get hit. If you scrutinise him, even if he is getting hit or on top, you see the same sort of approach and manner. It's difficult to fathom what's going inside. As a spinner if you have that attitude, its a big advantage," said Crowe. The Englishman who played 42 first class matches and took 60 wickets with his right-arm offbreak said whatever 'mystery' Kuldeep has on the field is due to his unwavering determination.

"People talk about mystery spin but that's what you see. What you don't see is his calmness. When the ground is full and he is bowling to a Virat (Kohli) or a AB (de Villiers) that calm is what makes you successful. And Kuldeep has that," he said. Crowe also hinted that top-order batsman Shubman Gill might be used as a part-time bowler besides Nitish Rana, who did the job with some success last time.