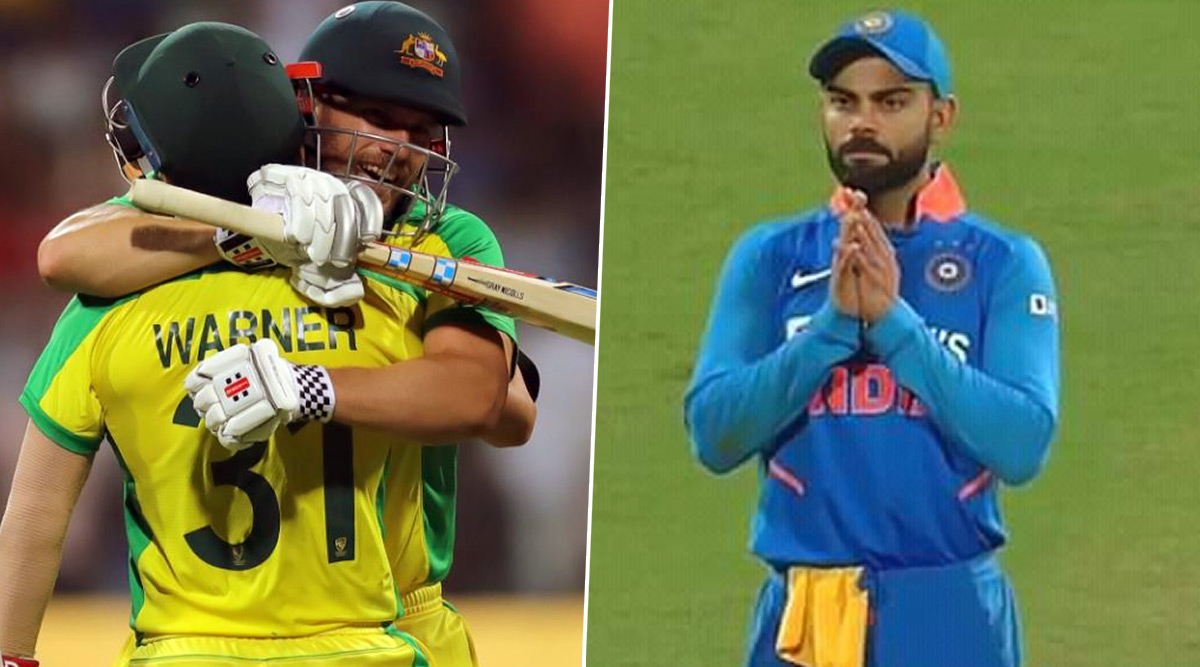 David Warner and Aaron Finch hit centuries as Australia thrashed India by 10 wickets to take 1-0 lead in the three-match ODI series. Warner and Finch’s record-stand of 258 not-out completed a comfortable win for the visitors after a Mitchell Starc-led pace attack bundled India for 255 runs inside 38 overs. India’s sudden collapse a 121-run second-wicket partnership between Shikhar Dhawan (74) and KL Rahul (47) set the tone for an Aussie comeback which was completed by the rampant Warner an Finch, who reduced Indian fielders to mere spectators with 35 boundaries between them in a 256-run chase. India’s defeat kicked-off a flurry of funny memes and jokes on Twitter as fans picked on the hosts for a disappointing performance. India Vs Australia, Highlights And Cricket Score 1st ODI Match.

Warner struck 128 from 112 deliveries with the help of 17 boundaries and 3 mammoth sixes, while Finch was more subtle and hit 110 runs from 114 deliveries, which comprised of 13 boundaries and 2 hits over the fence. Shradul Thakur was the most expensive of the Indian bowlers giving away 43 runs in 5 overs while three other bowlers, including Mohammed Shami (58 runs in 7.4) and Jasprit Bumrah (50 in 7), completed half-centuries with the ball. India vs Australia 1st ODI 2020 Records & Stat Highlights.

Their woeful performance led to some fans mocking the Indian team for demolishing weaker oppositions while succumbing to defeat against Australia. Some others were reminded about Australia’s dominance over India in the 90s when Australia were ruthless. Virat Kohli’s Hilarious Banter With Umpire Shamshuddin During IND vs AUS 1st ODI 2020 Makes Fans Go ROFL!

Reminded of the 90s

A smarter way to last longer on the pitch.#INDvsAUS pic.twitter.com/C9cVUcckeI

Attitude of RCB fans after watching the form of their batsman Aaron Finch in Indian pitch that too against Bumrah Shami bowling attack .#INDvAUS pic.twitter.com/GTBXpd3tR4

2] in front of Australia. pic.twitter.com/LmYqYFa10Y

Virat Kohli on the Wrong End

This is only the 2nd time in history that India has lost an ODI at home by 10 wickets. The only other occasion was in 2005 versus South Africa in Kolkata #INDvsAUS #Cricket

Chahal mind voice after the match thanks God I was not in playing 11 pic.twitter.com/SYWLrbluJU

We need ur presence Sir😢

Many also thought about Indian Premier League (IPL) franchise Royal Challengers Bangalore (RCB) on seeing Aaron Finch’s form with the bat. Finch equalled Adam Gilchrist for 4th most ODI centuries for Australia with his 16th ODI ton. Warner did one better and jumped to second in the same list with his 18th ODI hundred.