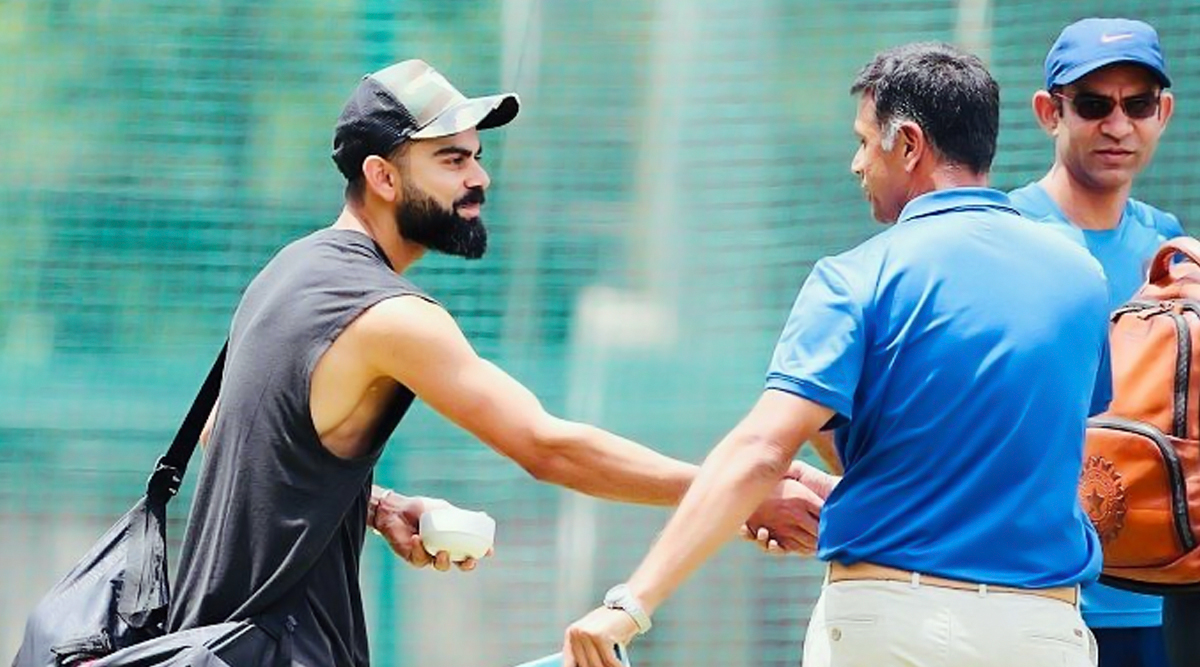 Virat Kohli met Rahul Dravid during practice sessions in Bengaluru. The Indian skipper met the former Indian cricketer ahead of the third T20I against South Africa at M. Chinnaswamy Stadium. The 3rd T20I match of South Africa's tour of India will be played on Sunday, September 22. Kohli shared a photo of his meeting with Dravid on Instagram. In Kohli's Instagram post, he can be seen shaking hands with the legendary Indian batsman.

In the photo, Kohli is seen carrying his kit bag. With a cap on his head, he greets India's overseas batting consultant with a handshake. People also lauded both the legends in comments. Have a look at the photo below. Virat Kohli Posts Throwback Photo From Teenage Days, Netizens Troll Indian Skipper With Funny Memes and Hilarious Tweets!

On Friday, BCCI had shared a photo of Rahul Dravid with Ravi Shastri. BCCI called them legends and was trolled by Twitterati over the same. Many Twitter users started questioning BCCI for calling Shastri as a legend. However, they lauded Dravid and called him a real legend. BCCI Shares Ravi Shastri and Rahul Dravid’s Photo, Twitterati Mercilessly Troll Them for Calling Team India Head Coach ‘Great’.

Rahul Dravid, who has scored more than 25,000 runs in international cricket, is one of the best batsmen to play for India. He is popularly known as 'The Wall" for his magnificent defensive batting in Test and ODI cricket. He was one of the most patient batsmen to see on the field. He is also the former coach of Under 19 and India A teams.

Meanwhile, India lead the three-match T20I series 1-0 after crushing South Africa in the 2nd T20I by 7 wickets. Kohli smashed 72 runs to hand India victory and clinch player of the match award. The first T20I was washed out due to rain. The T20I international series will be followed by a three-match Test series.