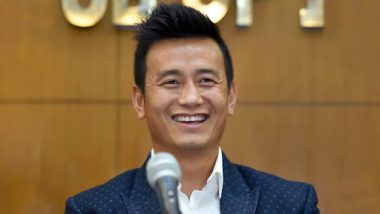 Kolkata, July 31: There is a need to focus on grassroots development in order to take Indian football to the next level, feels decorated former captain Bhaichung Bhutia. "We need to produce good quality players. That's very important, when I say that I don't mean we don't have good players now. But in order to compete in Asia and at the world level we need to produce bigger better players from the grassroots," Bhutia said during an Instagram live session with the All India Football Federation (AIFF).

"These are things that will help in the long run. We still need to be strong in the grassroot for the national team to make progress. We should be qualifying for the Asia Cup in under-17 and under-15 quite regularly," the iconic former striker added. Bhutia also said infrastructure wise things are much better than when he played for the country. Bhaichung Bhutia Says He Will Consider Running for AIFF President in Future.

"In 2008, 2009 we played quite a few but when I started playing in 1995, I still remember few years we had just two or three matches the entire year -- just one qualifying for WC or pre-Olympics. "We were not lucky to get good teams, we got big countries and we were out of the tournament," he said.

Bhutia also pointed that the inception of the Indian Super League (ISL) in 2014 has helped the sport a lot in the country. "At the same time with the ISL coming in the infrastructure and the training ground, the quality of the grounds is also becoming of a much much higher standard now." Bhutia, who played 37 games for English club Bury and eight for Malaysian football club Perak FA, also said young footballers must try and play in the foreign leagues.

"Playing in foreign league gives you an idea of what football is all about, what professional football is and what the business of football is. As a player, you improve a lot. It made me aware as a player, a lot of technical points. "Not just Europe but player's can focus on Qatar, UAE, China, Japan, a smaller league in Europe like Belgium where you get the opportunity to play," he added.

(The above story first appeared on LatestLY on Jul 31, 2020 09:47 PM IST. For more news and updates on politics, world, sports, entertainment and lifestyle, log on to our website latestly.com).