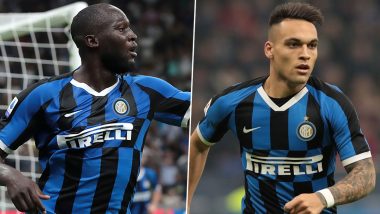 Inter Milan will take on Shakhtar Donetsk in the semi-finals of the UEFA Europa League 2019-20 at the Esprit Arena in Dusseldorf on August 17, 2020 (late Monday night). The two sides will be looking to book a place in the finals against five-time winners Sevilla, who defeated Manchester United in their game. This clash will be a one-off tie instead of the traditional two-legged affairs due to the changed format amid coronavirus pandemic. Inter Milan vs Shakhtar Donetsk, UEFA Europa League 2019–20 Semi-Final Live Streaming Online.

This will be Inter Milan’s first semi-final appearance in a European competition since the 2009-10 season when they won the treble under Jose Mourinho. Antonio Conte came close in leading his side to a Serie A title but with Juventus continuing their dominance, the Italian manager will look to end the season on a high with a European trophy. INT vs SHA Dream11 Prediction in Europa League 2019–20.

Meanwhile, Shakhtar have defied expectations this season by reaching the semi-finals of Europa League this season. If they manage to get past Inter Milan, it will be only their second ever UEFA final, last achieving it in 2008/09. The two teams last in 2005/06 in UCL qualification which the Italians won comfortably. So with both teams looking for a European final appearance in over a decade, here are some players who could have a huge say in the final result.

The Belgian international has been sensational in Europa League this season. He has scored four goals in as many games and his strike against Bayer Leverkusen in the semis, made him the first player in the competition's history to score in nine consecutive games. He has been involved in 15 goals in that time period.

At 33 years old, the Brazilian is rediscovering himself and Shakhtar are benefitting from it. Moraes has scored 25 goals this season. The striker has found the back of the net in both of the Ukrainian side’s Europa League games. In two games post lockdown in UEL, the Brazilian forward has scored three times.

The Argentina international has been underwhelming since football’s restart from coronavirus enforced suspension. He is yet to score in Europa League this season and will be looking to break that duck. The 22-year-old has scored just three goals in 15 appearances post lockdown.

(The above story first appeared on LatestLY on Aug 17, 2020 06:58 PM IST. For more news and updates on politics, world, sports, entertainment and lifestyle, log on to our website latestly.com).