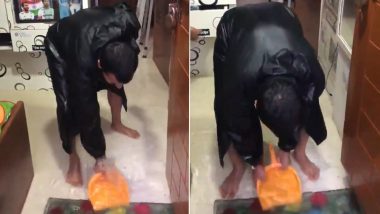 Yuvraj Walmiki faced a peculiar problem as Mumbai rains disrupted the lives of the people in the city and created a flood-like situation. The hockey player who found himself in ankle deep-water inside his house. Yuvraj was seen attempting to drain off the water from the house and even took to social media seeking help from the authorities. He posted a 15-second long video alongside his tweet which read, "Is there anyone who can help...my house is been floating..please help." Along with tagging the official account of the Bombay Municipal Corporating, he also addressed Maharashtra Cheif Minister Uddhav Thackrey and his son Aditya Thackrey. Mumbai Rains: Cabinet Minister Aaditya Thackeray Appeals People to Remain Indoors Amid Heavy Rainfall and Strong Wind Warnings.

Aditya has been very active when it comes to these activities and in fact, he had even advised the citizens of Mumbai to stay indoors amid stormy rains. The official account of the BMC went onto respond to the tweet and asked for his location. A red alert has been issued for the city as Mumbai night face extremely heavy rainfall in the next 24 hours. For now, let's have a look at the tweet by the hockey player.

Hello Sir, please dm us with your location and contact information.

Yuvraj had boarded the flight to the Netherlands in 2014 World Cup at The Hague.  He is the only Indian player to have played German Hockey League for eight years continuously.  Yuvraj also became the first hockey player to have participated in  'Khatron Ke Khiladi' season 7. His brother Davinder Walmiki also represented India as a defender.

(The above story first appeared on LatestLY on Aug 06, 2020 10:32 AM IST. For more news and updates on politics, world, sports, entertainment and lifestyle, log on to our website latestly.com).