World No. 1 Novak Djokovic played his first Grand Slam match of 2022 at the French Open during a night session on Monday and said he felt great to be back playing in front of a full capacity crowd at Court Philippe-Chatrier. 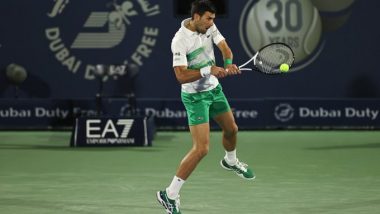 Paris, May 24: World No. 1 Novak Djokovic played his first Grand Slam match of 2022 at the French Open during a night session on Monday and said he felt great to be back playing in front of a full capacity crowd at Court Philippe-Chatrier. Djokovic, the defending Roland Garros men's singles champion, was deported from Australia on the eve of the the Australian Open in January this year because of a lack of clarity over his Covid-19 vaccination status. He stepped on the court for a Grand Slam match on Monday night and got his Roland Garros campaign started with a straight-sets win over Yoshihito Nishioka of Japan. French Open 2022: Novak Djokovic Beats Yoshihito Nishioka, Storms into Round 2.

Djokovic was simply a class above the world No.99 Nishioka across three sets. Once the 35-year-old shook off the cobwebs, there was little the Japanese player could do to halt the world No.1 as he raced to a 6-3, 6-1, 6-0 win. "It's great to be back. Obviously, it's a grand slam, historically these four tournaments have been the most important in our sport," Djokovic said during his on-court comments after the win. Djokovic said it was not difficult to find motivation as he was playing in a Grand Slam, though the conditions at night were a bit different from what he experienced while practicing in the day.

"At the same time, I think it is also important to find your motivation after so many years. It's not that difficult because I love playing in Grand Slams and the memories I had last year from winning the trophy stayed with me in my head coming into the court tonight. In night session different conditions from when I was training in these couple of days," said Djokovic. The Serbian 20-time Grand Slam winner also found the court a bit different from last year. "It's a low bounce, very slow, very muddy, on the court. Nishioka surprised me in the beginning I think he was playing well and it was difficult to go through him. So, I had to serve well, which I did in the important moments and that helped." Novak Djokovic Blasts Wimbledon, Says Ban on Russians is ‘A Mistake’.

Djokovic also found the atmosphere at the Ronald Garros different from the last two years as the restrictions on crowd capacity due to the Covid-19 pandemic has been lifted. "Obviously, these last few years with the Corona we didn't have full capacity. Today, I mean this year, we have full capacity, so of course, the atmosphere is different you can feel the vibes, so it was fun," he said.

It was fun on the court too after Djokovic subdued the initial resistance from Nishioka, who came out swinging from the very first point, targetting a confidence-boosting opening break and early advantage. But maintaining that high level against the defending champion was always going to be a challenge, and it took only a few games for the cracks to show in the Japanese player's game. Everything Nishioka did, Djokovic responded to just a little bit better, faster and sharper.

(The above story first appeared on LatestLY on May 24, 2022 02:46 PM IST. For more news and updates on politics, world, sports, entertainment and lifestyle, log on to our website latestly.com).