Motorola has confirmed that it will be hosting a launch event on May 10, 2022. The company made this announcement via Weibo. 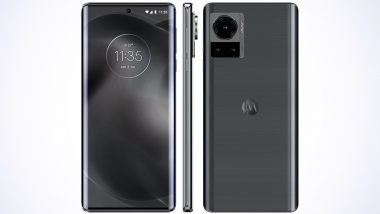 Motorola has confirmed that it will be hosting a launch event on May 10, 2022. The company made this announcement via Weibo. During the launch event, the tech giant is expected to launch two new smartphones. Though Motorola has not revealed the name of the smartphones, a report has claimed that these two handsets could be Motorola Frontier and Moto G82. Motorola Edge 30 Pro Now Available for Sale via Flipkart.

Motorola Frontier is likely to come with a 6.67-inch FHD+ OLED curved display with a refresh rate of 144Hz. It comes powered by a Snapdragon 8 Gen 1+ SoC coupled with 12GB of RAM and up to 256GB of internal storage. It could get a 200MP ISOCELL HP1 image sensor and a 60MP selfie lens.

The device is expected to pack a 4,500mAh battery with 125W wired charging and 50W wireless charging. On the other hand, Moto G82 was reportedly spotted on TENAA and 3C websites. The Moto G82 is said to sport a 6.55-inch pOLED FHD+ display with a refresh rate of 120Hz. It could be powered by a Snapdragon 695 SoC coupled with up to 8GB of RAM and 128GB of internal storage. The device is likely to come packed with a 5,000mAh battery with 33W fast charging support.

(The above story first appeared on LatestLY on May 05, 2022 05:15 PM IST. For more news and updates on politics, world, sports, entertainment and lifestyle, log on to our website latestly.com).