OnePlus 6 is expected to be launched in China on May 17 at 10 am in Beijing as per an official invite listed on the Chinese OnePlus site. 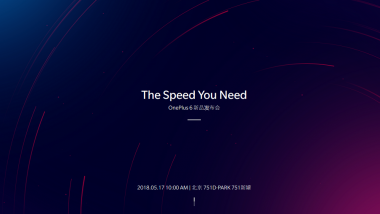 OnePlus 6 from the Chinese smartphone maker is certainly one of the most awaited smartphones globally. With number of rumors and speculations, the OnePlus 6 has finally received a launch date which is believed to be May 17 as an official invite has been listed on the Chinese website. The invite also mentions that the ticket sales will commence on April 27 exclusively on OnePlus Mobile App at 10 Am for CNY 99 which is around Rs. 1000. Previously, it was also reported that the company might launch the smartphone in China on May 5. Later on, some fans received an email to trail the upcoming flagship device from the Chinese smartphone maker on May 21. But, now it seems that the May 17 will be the official launch date. See More: OnePlus 6 Still Awaits Confirmed India Launch Date; Likely To Be Priced Around Rs 39,999

Moreover, the company has been the next-in flagship device for quite some time now. However, there is still no official word from the company regarding the launch of the device in the Indian market. It is believed that the smartphone will make way to the domestic market in next month only.

As far as the tech specs are concerned, the new OnePlus 6 will feature a notch on the top of the display similar to the one seen on the iPhone X. The notch on the top will allow larger screen real estate with around 90% screen to body ratio which will be the first time to be seen on any OnePlus smartphone. Read Also: Xiaomi Mi 6X aka Mi A2 Launching Today in China; To Get Dual Camera, Full HD+ Display, Snapdragon 660 SoC & More Features

The OnePlus 6 smartphone will sport a metal and glass body which complements the 6.28-inch Full-HD+ display with a tall 19:9 aspect ratio. The smartphone will come powered by a Snapdragon 845 processor coupled with 8GB RAM and 256GB of onboard storage. Additional features likely to be seen on the smartphone are Face Unlock, Dash charging, Dual rear cameras, 3.5mm headphone jack, OxygenOS based on Android Oreo, gesture navigation and more. Read More: OnePlus 6 Avengers: Infinity War Edition on the Cards as OnePlus Teams Up with Marvel

Coming to the price point, the new OnePlus 6 is speculated to be pricier than the current model which might start from Rs. 35,000. As a reminder, the OnePlus 5T and OnePlus 5 smartphones were launched in India with starting price of Rs. 32,999. Like all previous OnePlus phones, the upcoming flagship model will also be an Amazon India exclusive and the e-commerce website has already initiated pre-registration process.

(The above story first appeared on LatestLY on Apr 25, 2018 11:29 AM IST. For more news and updates on politics, world, sports, entertainment and lifestyle, log on to our website latestly.com).