Robots Journalists to Start Replacing People in Microsoft, US Company to Employ AI From June End to Ensure Cost Cutting 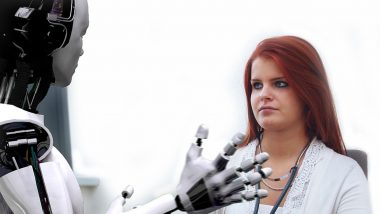 Microsoft has begun laying off a number of its employees and the reason to blame is not the pandemic, but robots! Yes, the leading US tech company is all set to replace its employees in the news media field by robot journalists. So what we casually say or read of machines taking over people's job is about to become a reality very soon, at the end of June to be precise. The company will be laying off almost 50 of their contractual employees and Artificial Intelligence (AI) robots will work in their place from the end of next month. Microsoft Reveals a New Powerful Supercomputer to Train Large AI Models.

As per reports in the Seattle Times, these new robots will be assigned the tasks of selecting the news and publishing it on the MSN website. From then on, the company is even looking at plans if these robots could fit in other positions as a part of their project. This deployment of robots to do the task had been a project since years and not a result of the Coronavirus pandemic, which has, in fact, made over millions of people jobless around the world. The statement about this decision mentions it was a part of their regular business evaluation.

The report states that news producers will lose their jobs by the end of June and for the moment, the full-time journalists will look over the work of the robots replacing the others. One of the staff members who is about to lose his job was quoted, "I spend all my time reading about how automation and AI is going to take all our jobs, and here I am – AI has taken my job." But also added that it can also be a risky move as the robots may not be aware of the "very strict editorial guidelines" followed by the company.

While the decision may not be influenced by the pandemic crisis, but it is still a measure taken for cost-cutting. Google is also investing in robot journalist projects to investigate how they may work. Is this just the start now for the robots to take over?

(The above story first appeared on LatestLY on May 31, 2020 10:18 AM IST. For more news and updates on politics, world, sports, entertainment and lifestyle, log on to our website latestly.com).