Samsung Galaxy M51, Galaxy M31s With 64MP Rear Camera Likely to Be Launched in India by Next Month

The Galaxy M31s is also expected to sport an in-display fingerprint sensor along with a 64MP primary shooter. 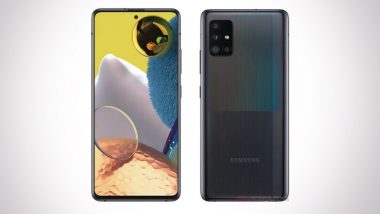 The South Korean tech major, Samsung is reportedly planning to introduce Galaxy M51 and Galaxy M31s smartphones in the Indian market. As per the latest reports, both the smartphones will come loaded with 64MP primary sensors, which are expected to be launched in India by June. The report also highlighted that the arrival of Galaxy M51 may get delayed to July owing to the production issues because of the Pandemic. Notably, Samsung is yet to officially confirm the launch of smartphones for the Indian market. Until then, it is requested to take ever rumour and speculation with a pinch of salt. Samsung Galaxy S20 Tactical Edition With Snapdragon 865 SoC Launched for US Government.

According to the report from 91Mobiles, the upcoming Galaxy M51 is expected to break covers next month, probably towards the end. The report also underlined that the production of the smartphone majorly depends on the situation in India. It can impact the launch timeline. The upcoming Galaxy M51 smartphone is tipped as a mid-range offering from Samsung, which will sport a 64MP main camera along with an in-display fingerprint sensor. However, the report does not reveal the price details of the smartphone.

Previously, a report emerged on the internet claiming that Galaxy M51 will be a rebranded version of Galaxy A52 with some tweaks on the hardware and design fronts. The handset is expected to be packed with 128GB of internal storage. As a reminder, the Samsung Galaxy A51 smartphone was introduced in the country earlier this year. The handset comes with a 6.5-inch Super AMOLED FHD+ Infinity-O Display with a resolution of 1,080x2,400 pixels. It is powered by Exynos 9611 SoC, which is clubbed with 6GB of RAM. The Galaxy A51 comes equipped with quad rear cameras. Samsung Galaxy A21s Smartphone With 5000mAh Battery Launched; Check Prices, Features &  Specifications.

(The above story first appeared on LatestLY on May 22, 2020 02:57 PM IST. For more news and updates on politics, world, sports, entertainment and lifestyle, log on to our website latestly.com).