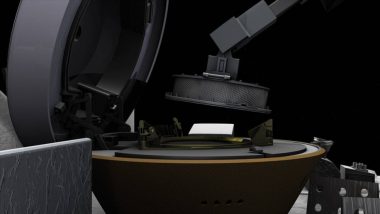 Washington, October 27: NASA on Tuesday said its OSIRIS-REx spacecraft is ready to perform an early stow on October 27 of the large sample it collected last week from the surface of the asteroid Bennu to protect and return as much of the sample as possible.

The images showed that some of these particles appeared to be slowly escaping from the collection head, called the Touch-And-Go Sample Acquisition Mechanism (TAGSAM). NASA Finds Water on Moon and Twitterati Finds it Reason to Leave Earth, Check Funny Memes, GIFs and Reactions to Water on Lunar Surface.

A mylar flap on the TAGSAM allows material to easily enter the collector head, and should seal shut once the particles pass through.

However, larger rocks that did not fully pass through the flap into the collection head appear to have wedged this flap open, allowing bits of the sample to leak out.

"The abundance of material we collected from Bennu made it possible to expedite our decision to stow," said Dante Lauretta, OSIRIS-REx principal investigator at the University of Arizona, Tucson. NASA Set to Unveil 'Exciting' New Discovery About Moon from SOFIA.

"The team is now working around the clock to accelerate the stowage timeline, so that we can protect as much of this material as possible for return to Earth."

The mission anticipates the entire stowage process will take multiple days, at the end of which the sample will be safely sealed in the spacecraft's Sample Return Capsule for the spacecraft's journey back to Earth. The sample is scheduled to be returned to Earth in 2023.

(The above story first appeared on LatestLY on Oct 27, 2020 04:35 PM IST. For more news and updates on politics, world, sports, entertainment and lifestyle, log on to our website latestly.com).