Total Solar Eclipse to Occur Today; Know Timings, Where & How To Watch Live Streaming Of Last Surya Grahan of This Year

The second and last solar eclipse of the year will occur today, on December 4. It will be partially visible from certain parts of the world, however it will not be visible in India. Scroll down to know where, how and when to watch the Surya Grahan. 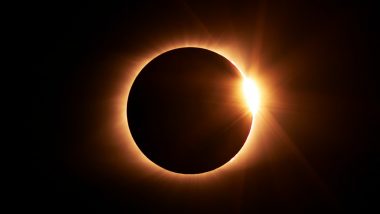 New Delhi, December 4: The last total solar eclipse of the year will take place on Saturday, December 4, marking the second such celestial event of the year. Various astrologers, astronomers, and space researchers among others eagerly wait to witness and study such outer-space events. The duration of the eclipse is estimated to be 1 hour and 43 minutes. According to NASA, certain countries will be able to witness the cosmic phenomenon partially and it will be fully visible only from Antarctica. This solar eclipse will not be visible in India. Solar Eclipse of December 4, 2021 Date & Time: Know Where Will Last Total Solar Eclipse of The Year Be Visible And More.

People are advised to not look at the sun directly with their eyes during the eclipse period. Ordinary sunglasses or dark sunglasses are also not suitable for viewing the eclipse. Special solar filters, such as eclipse glasses or handheld solar viewers should be used to view the eclipse. People can also use dark arc-welders glass to witness the event. Scroll down to know more about the last total Solar Eclipse or Surya Grahan of 2021. Solar Eclipse of December 4, 2021 Live Streaming: When, Where and How To Watch Free Live Stream of The Celestial Event Online.

Will The Solar Eclipse Be Visible In India?

The total solar eclipse of December 4, which is the second and last Surya Grahan for the year, will not be visible in India. However, one can view the live streaming of the event on official YouTube channel of NASA.

Where To Watch Live Streaming Of The Solar Eclipse?

Where Will Be The Solar Eclipse Visible?

(The above story first appeared on LatestLY on Dec 04, 2021 09:57 AM IST. For more news and updates on politics, world, sports, entertainment and lifestyle, log on to our website latestly.com).