Pakistan Prime Minister Imran Khan has said that his country would work with the Taliban authorities in Afghanistan to stop the Tehreek-e-Taliban Pakistan (TTP) and other sources of terrorism emanating from the neighbouring country. 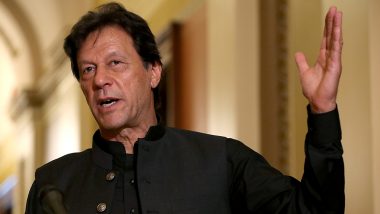 New Delhi, Sep 25: Pakistan Prime Minister Imran Khan has said that his country would work with the Taliban authorities in Afghanistan to stop the Tehreek-e-Taliban Pakistan (TTP) and other sources of terrorism emanating from the neighbouring country.

He said Pakistan was "extremely concerned" about the threat of terrorism from Afghanistan, particularly from the TTP, which had carried out thousands of attacks against Pakistan from the Afghan territory with the sponsorship and support of "certain hostile intelligence agencies", The Express Tribune reported. Sneha Dubey, India’s First Secretary at the UN, Slams Imran Khan at UNGA; Says Pakistan Nurtures Terrorists in Their Backyard (Watch Video).

In an exclusive conversation with Newsweek magazine, the Prime Minister pointed out that the "plethora of terrorist groups" could take advantage of the conflict in Afghanistan.  Who Is Sneha Dubey? Know All About India’s First Secretary at the United Nations Who Gave Strong Reply to Pakistan PM Imran Khan.

Khan mentioned that the TTP had also been responsible for most of its attacks on Chinese citizens working in Pakistan, perhaps with the support of the East Turkestan Islamic Movement (ETIM).

He stressed the need for working with the authorities in Afghanistan to neutralise those terrorist groups, The Express Tribune report said.

He mentioned that the Taliban had welcomed the prospects of being incorporated in the China-Pakistan Economic Corridor (CPEC) and establishing close relations with Beijing.

The Prime Minister stressed that the US could also play an important role in Afghanistan by contributing to its recovery and reconstruction.

About the CPEC, he said that China had already invested around $25 billion for the projects while additional projects worth $20 billion were under implementation.

Projects worth a further $25 billion are in the pipeline, Khan added.

(The above story first appeared on LatestLY on Sep 25, 2021 02:19 PM IST. For more news and updates on politics, world, sports, entertainment and lifestyle, log on to our website latestly.com).