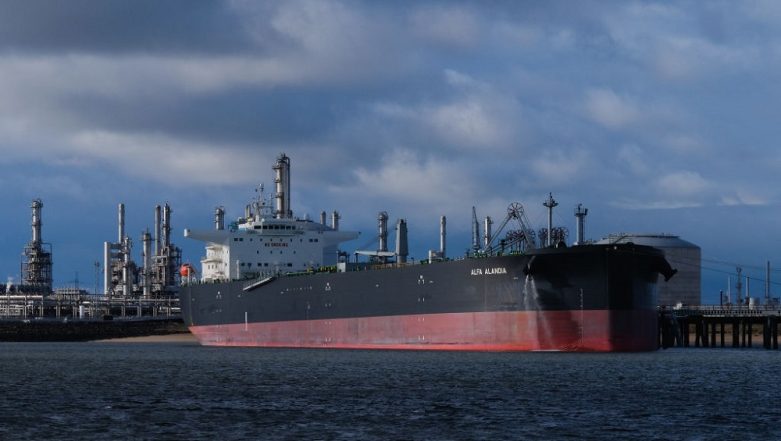 Tehran, July 6: Iran demanded Friday that Britain immediately release an oil tanker it has detained in Gibraltar, accusing it of acting at the bidding of the United States. A senior foreign ministry official "described the UK move as unacceptable" in a meeting with British ambassador Rob Macaire, who had been summoned to hear a formal protest, the ministry said in a statement.

He "called for the immediate release of the oil tanker, given that it has been seized at the request of the US, based on the information currently available", the statement added. The secretary of Iran's Expediency Council, a key advisory and arbitration body, warned that if Britain failed to release the tanker Iran would be forced to take tit-for-tat action against a British vessel. India Prepared to Deal with US Decision to End Iran Oil Waivers: MEA.

"If Britain does not release the Iranian oil tanker, the relevant authorities will be duty-bound to take reciprocal action and seize a British oil tanker," said council secretary Mohsen Rezai. Authorities in Gibraltar, a British overseas territory on Spain's southern tip at the western entrance to the Mediterranean, said they suspected the tanker was carrying crude to Syria in violation of EU sanctions.

The detention of the 330-metre (1,000-feet) Grace 1 comes at a sensitive time in Iran-EU ties as the bloc mulls how to respond to Tehran announcing it is poised to breach the uranium enrichment limit it agreed to in a troubled 2015 nuclear deal. The Grace 1 was halted in the early hours of Thursday by police and customs agencies in Gibraltar, aided by a detachment of British Royal Marines.

Gibraltar's Supreme Court ruled Friday that the vessel can be held for 14 more days, the territory's attorney general said.

The ship was detained 2.5 miles (four kilometres) south of Gibraltar in what it considers British waters, although Spain, which lays claim to the territory, says they are Spanish. Iran insists the vessel was intercepted in international waters and the foreign ministry official accused Britain's Royal Navy of taking action "tantamount to maritime banditry".

The Gibraltar authorities say the tanker was boarded when it slowed down in a designated area used by shipping agencies to ferry goods to vessels. "We have reason to believe that the Grace 1 was carrying its shipment of crude oil to the Banyas refinery in Syria," Gibraltar's Chief Minister Fabian Picardo said.

In a statement, Britain's Foreign Office said it welcomed Gibraltarian authorities "acting to enforce the EU Syria sanctions regime". Spanish Foreign Minister Josep Borrell told reporters the vessel was detained at the request of the United States. But Gibraltar insisted it acted of its own accord.

"There has been no political request at any time from any government," Gibraltar's government said in a statement. "The decisions of Her Majesty's Government of Gibraltar were taken totally independently, based on breaches of existing law and not at all based on extraneous political considerations."

European Union sanctions against war-torn Syria have been in force since late 2011. The 28-member bloc has imposed sanctions on Syrian officials including government ministers over their role in the "violent repression" of civilians. Russia said the tanker's detention was a "targeted action aimed at further complicating the situation around Iran and Syria".

The "enthusiastic remarks" by British and American officials following the seizure "show that this action was planned for a long time", the foreign ministry said in a statement. The move by Gibraltarian authorities comes just days after Iran announced it would exceed the uranium enrichment limit set under the 2015 nuclear deal.

The announcement followed a request by the US, which under President Donald Trump has forged ahead with a policy of "maximum pressure" against Iran in coordination with its allies Israel and Saudi Arabia. White House National Security Advisor John Bolton, a champion of the hawkish policy towards Tehran, tweeted the interception of the supertanker was "excellent news".

According to specialised shipping trade publication Lloyd's List, which analyses vessel-tracking data, the 1997-built ship is laden with Iranian oil. It reported that the ship loaded oil off Iran in April and sailed around the Cape of Good Hope in South Africa.