Without giving a specific timeline, US Secretary of State Antony Blinken said that Ukraine can "absolutely" win the ongoing war against Russia and praised the "extraordinary resilience" of the Ukrainian people. 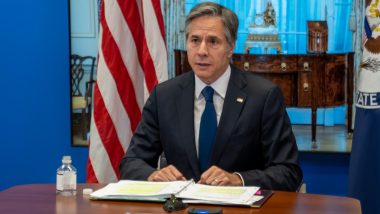 Brussels, March 5: Without giving a specific timeline, US Secretary of State Antony Blinken said that Ukraine can "absolutely" win the ongoing war against Russia and praised the "extraordinary resilience" of the Ukrainian people. Blinken made the remarks during an interview with the BBC on Friday night following a meeting with his European Union (EU)counterparts in Brussels.

When asked if he was convinced that Ukraine would win the war, Blinken said: "Over time, absolutely. I can't tell you how long this will go on. I can't tell you how long it will take. But the idea that Russia can subjugate to its will 45 million people who are ardently fighting for their future and their freedom, that does not involve Russia having its thumb on Ukraine, that tells you a lot." Russia-Ukraine War Live Updates: 14 Cargo Planes Carrying Military Aid Land Near Ukrainian Border; Samsung Suspends Product Shipment to Russia.

Despite his optimism, the Secretary of State also expressed concerns over further escalation of the ongoing situation. "It's something we care about and are focused on because the only thing worse than a war which is contained to Ukraine is one that escalates even further and goes beyond it," he told the BBC.

He warned that Russian forces were using "increasingly brutal" methods against civilians in Ukraine, and that there had been tremendous human suffering as a result. "We're seeing Russia go after critical infrastructure that's denying Ukrainians water, denying them electricity, denying them heat," he said.

"Those methods are, unfortunately, tragically, part of the Russian playbook under President (Vladimir) Putin. And I think we're likely to see more of that." Asked if the US would seek a change in Moscow's leadership to bring an end to the invasion, he replied: "We don't seek that, and in any event it's not up to us. The Russian people need to decide their leadership.

"What I would say to the Russian people is: How in the world is this war of aggression... advancing your interests, your needs?" Since Russia's invasion began on February 24, Ukrainian forces have continued with a stiff resistance against Moscow's advances.

However, Russian troops on Friday captured the the Zaporizhzhya nuclear power plant, the largest in Europe, where a fire had erupted earlier in the day due to shelling.

(The above story first appeared on LatestLY on Mar 05, 2022 11:43 AM IST. For more news and updates on politics, world, sports, entertainment and lifestyle, log on to our website latestly.com).