The news of Rege-Jean Page's exit after the completion of the first season of Netflix's romantic period drama Bridgerton, came as a bolt from the blue to his fans. 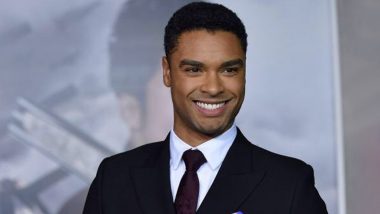 British actor Adjoa Andoh, famous for her role as Lady Danbury in Netflix hit romantic series Bridgeton, broke her silence on the lead man - Rege-Jean Page's departure from the show. The news of Rege-Jean Page's exit after the completion of the first season of Netflix's romantic period drama Bridgerton, came as a bolt from the blue to his fans. Since then different self-woven theories have been going around on social media. In an interview with E! News, Adjoa Andoh dished on all the self-woven theories of the actor's departure, explaining that "the arc of the show" is the reason behind his exit. Bridgerton Producer Breaks Silence on Fans’ Reactions to Rege-Jean Page’s Exit.

The actor's departure has left many viewers disappointed, with some even suspecting that the writer would have killed his character Simon Basset in the forthcoming season. "We're following the overriding framework of Julia Quinn's beautiful novels. There are eight Bridgerton children: one down, seven to go," the 58-year-old star told. Adjoa, who had played a motherly figure to the Duke Of Hastings (Rege-Jean Page) in the series, added that the forthcoming season that is season 2, is all about the eldest Bridgeton - Anthony Bridgerton played by Jonathan Bailey. "So there you are. That's the arc of the show," she said. Bridgerton: Rege-Jean Page Opens Up About Why He Will Not Be Returning for Season 2.

The Shonda Rhimes series has not only blown its fans with the news but also did the same with Andoh, as she admitted."We all love Rege and we're all going to miss Rege but it's not a huge surprise". Andoh also shared that she and Page share a great bond with each other just like they did appear to have onscreen. She cited Page's sense of humour, "the way he loves to have a good argument and discuss and ruminate about things," among the traits she will miss most about working alongside him.

Andoh revealed that she and Page even have similar tastes in music while calling him a lovely man and a friend for life. E! further asked her if she expected 'Bridgerton' to be as big as it was, especially in the pandemic. She replied, "Obviously it's Shonda Rhimers' first gig with Netflix so we knew that was an amazing partnership." "It's sort of surreal because it all blew up as we were in lockdown. So it's like, 'Hurray!' from my kitchen," she concluded. 'Bridgerton', created by Chris Van Dusen and based on author Julia Quinn's book series of the same name, premiered on Netflix last December.

Bridgerton follows the esteemed families of British high society and their romantic pursuits through the lens of a mysterious gossip columnist, Lady Whistledown (voiced by Oscar-winning star Julie Andrews). After breaking streaming records, the show was renewed for a second season in January. Production on the show's sophomore outing began in London in March. On Tuesday, the official 'Bridgerton' social media accounts announced that the drama has been renewed for the third and fourth seasons.

The second season of the series draws from the sequel in Quinn's romance series, 'The Viscount Who Loved Me', which follows the quest of Daphne's brother, Lord Anthony Bridgerton, to find his viscountess. The first season of the romantic period drama focused on the steamy courtship between Daphne Bridgerton (Phoebe Dynevor) and Simon Basset, the Duke of Hastings (Rege-Jean Page).