With the 2021 edition of the Indian Premier League (IPL) set to get underway from September 19, the Board of Control for Cricket in India (BCCI) has given permission to the franchises to start heading to UAE after August 10. 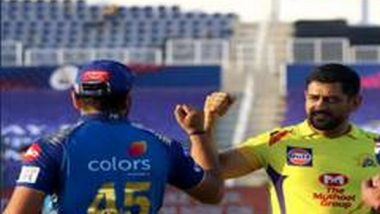 New Delhi, August 2: With the 2021 edition of the Indian Premier League (IPL) set to get underway from September 19, the Board of Control for Cricket in India (BCCI) has given permission to the franchises to start heading to UAE after August 10.

And Chennai Super Kings is looking to head over to Dubai next weekend. The 14th edition will resume with defending champions Mumbai Indians locking horns with Chennai Super Kings and CSK CEO Kasi Viswanathan said the team is looking to arrive in Dubai on August 14 or 15. "We are looking to leave for the UAE on August 14-15 as the BCCI has said teams can leave after August 10," he told ANI. More than teams starting camps in the UAE, all eyes are on the availability of foreign players and interestingly, ESPNcricinfo has reported that England's tour of Bangladesh has been indefinitely postponed. IPL 2021 Suspended: Disappointed Fans React With Sad Memes and Funny Tweets After BCCI Vice-President Rajeev Shukla Confirms Indian Premier League 14 Suspended for This Season.

The teams were set to play three ODIs and three T20Is in September-October with an eye on the T20 World Cup. But this cancellation opens the door for the England and Wales Cricket Board to allow the England players to play in the IPL. While players from South Africa and West Indies are expected to be available, it is players from England and Australia who are yet to get a go-ahead to participate in the remaining part of the cash-rich league from their boards.

An official of a franchise -- which has its core foreign players coming from the English team -- said the postponement of the England-Bangladesh series could further open the door for a blockbuster IPL in the UAE.

"While we are yet to get any official communication from the BCCI on the availability of the English or Australian players, they have said that talks are moving in a positive direction. The postponement of the England-Bangladesh series further raises the chances of English players being available. We should be clear about this by the end of this week," the franchise official said.

When contacted, a BCCI official kept it short. "Fingers crossed," he said. Last month, the BCCI announced the schedule for the remainder of the IPL 2021 which will be held in the UAE. A total of 31 matches will be played in the duration of 27 days.

The 14th season, which was postponed in May this year in the wake of the COVID-19 pandemic, will resume on September 19 in Dubai with a blockbuster clash between Chennai Super Kings and Mumbai Indians.

Comments
Tags:
BCCI Board of Control for Cricket in India Chennai Super Kings CSK IPL 2021 Kasi Viswanathan UAE
Comments
You might also like