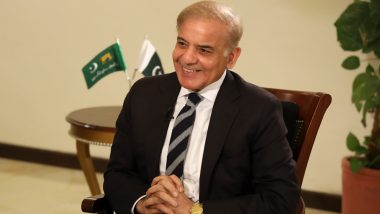 In a statement, Pakistan's PM ordered an investigation into the collection of federal excise duty. He said it should be investigated as to how the excise duty was collected from the passengers without the approval of the cabinet, ARY News reported.

He expressed his disappointment with the collection of federal excise duty from passengers at the airports. Sharif said that the practice of causing trouble to the passengers should be discontinued immediately. Also Read | 'Pakistan Will Not Accept Imported Government', Says Former PM Imran Khan at Islamabad Rally.

Shehbaz Sharif instructed the finance minister that after an immediate inquiry, strict action under the law should be taken against those responsible for the illegal act. "Those who inflicted suffering on the passengers had no right to hold their posts," he added.

The premier asked the finance minister to return the money to the passengers from whom federal excise duty was collected. He called for immediate implementation of his orders and submission of a report after action against the persons responsible, reported ARY News.

Meanwhile, Pakistan Muslim League-N President Maryam Nawaz on Saturday claimed that the International Monetary Fund (IMF) had told the coalition government that they don't trust the country because of "fitna" referred to Imran Khan.

Addressing the party workers in the PP-167 constituency, Maryam referred to the agreement, which is signed between the Fund and "fitna" Khan, as a "bad deal" and also said that the former Prime Minister took a U-turn by breaching the clauses that Pakistan agreed with the global lender.

During her speech, PML-N President claimed that the party supporters from the constituency present in Green Town are more as compared to the number of people attending Khan's "historic rally" on the Parade ground in Islamabad.