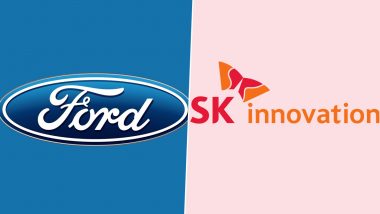 Seoul: South Korean battery maker SK Innovation and American automaker Ford Motor will establish a 6 trillion won ($5.3 billion) joint venture in the United States to produce batteries for electric vehicles, the two companies have said. The two companies signed a memorandum of understanding on the joint venture, called BlueOvalSK, to build a battery factory with 60 gigwatt hours (GWh) of production in the US by the mid-2020s. Ford EcoSport SE Variant Launched in India, Prices Start From Rs 10.49 Lakh.

Their announcement came a day before South Korean President Moon Jae-in meets with US President Joe Biden in Washington on Friday (US time) to discuss bilateral issues, including cooperation in the growing EV industry, reports Yonhap news agency.

SK Innovation, a refinery-and-battery unit under South Korea's No. 3 conglomerate SK Group, has been building a $2.6 billion battery factory in Georgia, which will supply batteries for Ford's F-150 EVs from next year.

SK Innovation aims to expand its global battery production capacity to 85 GWh in 2023 and over 125 GWh by 2025, and the joint venture will expand the capacity to 190 GWh in the next five years, it said. "The joint venture is expected to play a key role in the U.S. administration's strong drive for the EV industry value chain," SK Innovation CEO Kim Jun said in a joint statement.

The joint venture deal comes after SK Innovation last month agreed to pay $1.8 billion to its bigger home rival LG Energy Solution to settle a battery trade secret case, which had clouded its EV battery business in the U.S. The settlement averted the worst-case scenario for SK, which would have had to abandon its Georgia factory if the 10-year import ban took effect, weighing on the Biden administration's EV push.

The SK-Ford partnership is expected to be similar to what LG Energy has with another American automaker, General Motors Co., with the two jointly building battery factories in Ohio and Tennessee. Ford has said it will invest $22 billion in electrification by 2025, vowing to step up efforts to build its own batteries for stable supply of the key component.

(The above story first appeared on LatestLY on May 21, 2021 05:31 PM IST. For more news and updates on politics, world, sports, entertainment and lifestyle, log on to our website latestly.com).