Bollywood loves formulas and the flopping of the same really affects them. Sequels of hit movies drowning at the box office is one such miscarriage of sure-win formula. Let us tell you 10 such follow-ups which were wildly anticipated and promoted with unsatisfactory outcomes. 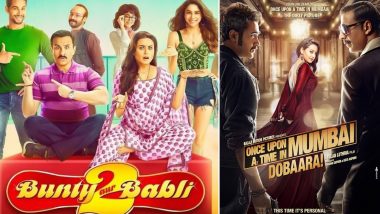 Sequels are mass produced in Bollywood. A seemingly fine film which manages to fetch good ROI becomes an easy target for follow ups. Now the sequels need not be the ones that take the storyline of the original forward. They could be completely independent of each other, but there are few movies that stayed loyal to the original flow of events. Many of these sequels earned more than even their originals but they aren't necessarily great movies. These films at least made money for its producers. However, what hurts everyone from the producers to audiences are the flop sequels of hit movies. Bollywood loves formulas and the flopping of the same really affects them. Let us tell you 10 such movies which were wildly anticipated and promoted with unsatisfactory outcomes. Bunty Aur Babli 2 Movie Review: Rani Mukerji, Saif Ali Khan, Siddhant Chaturvedi, Sharvari Wagh Add Infectious Charm to This Feeble Con-Game (LatestLY Exclusive)

First, we have no clue why this movie was even made after so many years. Second, rehashing the old film doesn't win anybody brownie points. The sequel starred Saif Ali Khan instead of Abhishek Bachchan along Rani Mukerji and no Amitabh Bachchan. Infusing it with young blood like Siddhant Chaturvedi and Sharvari didn't work either. The film could hardly take off at the box office to mean anything money-wise.

Once Upon Ay Time In Mumbaai Dobaara

The fate of this movie is highly debatable still. It released a week before Chennai Express and during Eid. Even Akshay Kumar as don couldn't save it from drowning although it is still unknown whether it's because of CE or the movie itself. The original Once Upon A Time In Mumbaai is considered one of the successful Ajay Devgn movies.

One interesting and perhaps the only USP of this sequel to Rock On was it tried to continue with original storyline. It just took a leap of certain years. The movie tried to capture the rock craze in the Northeast but couldn't make much sense of the frenzy there. Resultant? Couldn't become the hit that the original was.

Force was a remake of Suriya's Kaakha Kaakha and packed some really mean stunts. Vidyut Jammwal as the antagonist was super fine. The sequel however was just an attempt to cash in on the name which yielded low rewards at the box office.

The YPD series started well with the first film managing to make people laugh. From then on, it was just nothing. Both its sequels were banal and couldn't find an audience. Apne 2: Sunny Deol, Dharmendra And Bobby Deol To Team Up Once Again!

Bheja Fry was one of the biggest surprise hits of Bollywood. With minimal investment, the movie made quick profits for its producer. Guess that prompted them to make a sequel but lack of good execution and interesting script turned it into a below average fare at the box office.

Bhootnath was one of those rare movies that catered to a demography Bollywood ignores royally, kids. They lapped it up. Similar reaction was expected from the sequel but it turned out to be a dud. The whole election spin to the story took it nowhere.

Yet another movie that should have never existed. Pyaar Ke Side Effects was simple, sweet and smart. SKSE is exactly the opposite and hence, it was least appreciated.

Ishqiya was smooth, edgy and raw. Plus, some amazing performers worked for the film. Dedh Ishqiya tried to do a lot of things. They lessened the earthiness of the content to suggest a broader theme which made no sense to the cinema-going public. Hence, it was a flop.

(The above story first appeared on LatestLY on Nov 25, 2021 06:12 PM IST. For more news and updates on politics, world, sports, entertainment and lifestyle, log on to our website latestly.com).