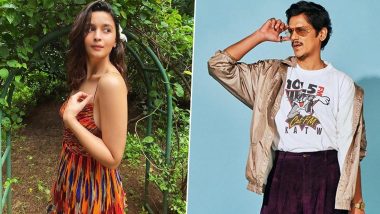 Loved the performances in Gully Boy? Well, brace yourself as the two actors from the movie are reuniting for another interesting project. This time it is Alia Bhatt and Vijay Varma for a dark comedy. Tentatively titled as Darlings, the movie is backed by none other than Shah Rukh Khan's banner, Red Chillies Entertainment, as per the latest reports. After Pathan, Deepika Padukone Rumoured to Star Opposite Shah Rukh Khan in Atlee's Sanki.

Alia certainly has some of the heavy projects on her shoulders as of now. This one will apparently have Vijay as her on-screen husband, PeepingMoon. The portal also explains it as the female-centric film. The flick will also reportedly go on floors in January 2021.

Apart from this movie, SRK's home production is also backing the much-awaited film of Bob Biswas. The Abhishek Bachchan starrer is the spin-off of the Vidya Balan starrer movie Kahaani, where Bob was a crucial character. The banner also produced Alia-SRK starrer Dear Zindagi. Well, this one certainly is going to be a huge film with a fresh genre.

(The above story first appeared on LatestLY on Sep 21, 2020 09:18 PM IST. For more news and updates on politics, world, sports, entertainment and lifestyle, log on to our website latestly.com).