Fabulous Lives of Bollywood Wives: Shah Rukh Khan Reveals That Neelam Kothari Is One of the Reasons Why He and Gauri Got Married!

In the finale episode of Fabulous Lives of Bollywood Wives, we see Shah Rukh Khan confessing that Neelam Kothari is one of the reasons why he and Gauri got married. Do not believe us? Read on. 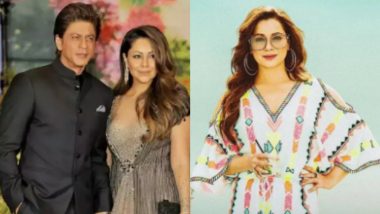 Love it or hate it, but Netflix’s latest reality-based drama Fabulous Lives Of Bollywood Wives has been trending ever since the show dropped online. It's based on the lives of four star wives namely Maheep Kapoor (married to Sanjay Kapoor), Bhavana Panday (married to Chunky Panday), Seema Khan (married to Sohail Khan) and Neelam Kothari (married to Samir Soni). However, apart from these ladies, the finale episode of the show is all dedicated to Gauri Khan and Shah Rukh Khan. Fabulous Lives of Bollywood Wives: Shah Rukh Khan, Jet Li, Jacqueline Fernandez, Sidharth Malhotra and More – 18 Bollywood Celeb Cameos to Catch in the Netflix Reality Series (LatestLY Exclusive).

In the said episode, SRK being a gentleman he is praises each one of the star wives. Amid this, when King Khan spills the beans about Neelam Kothari, he reveals that one of the reasons he and Gauri got married was because they were both fans of her. “It wasn’t Mr. Vinod Khanna or Mr. Amitabh Bachchan. It wasn’t Sanjay Dutt. It was you,” SRK says to Neelam. Fabulous Lives Of Bollywood Wives Twitter Review: Neelam Kothari, Maheep Kapoor, Seema Khan and Bhavana Pandey's Netflix Show Gets Heavily Trolled For Its Head-Spinning Content!

The superstar then adds that when he used to think about being a part of the showbiz, he came across Neelam’s show Lehrein, in which, she was choreographed by late Saroj Khan. Fabulous Lives of Bollywood Wives Review: Bhavna Pandey and The Men Try To Redeem This Inane Excuse Of A Show (LatestLY Exclusive).

“Sarojji came and told her the steps and Neelam was just there listening... and believe you me she didn’t understand anything. That’s why I’m her fan. She only said one thing - is that right?” he said while reminiscing old memories. SRK concludes by saying that ever since then even he wanted to say ‘is that right?’ in Neelam's style to a director and we see the wives laughing out loud. Indeed, none like SRK!

(The above story first appeared on LatestLY on Nov 28, 2020 11:42 AM IST. For more news and updates on politics, world, sports, entertainment and lifestyle, log on to our website latestly.com).