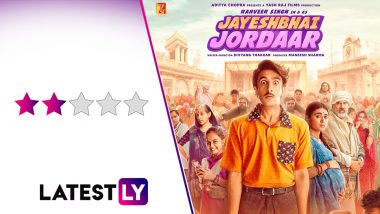 Jayeshbhai Jordaar Movie Review: Debutant director Divyang Thakkar's Jayeshbhai Jordaar starring Ranveer Singh in the lead role attempts to deliver a strong message. It dares to raise important questions on gender stereotypes and female infanticide in a humorous and satirical fashion. Unfortunately, it stops just at that. The bizarre and the juvenile execution make this promising idea go totally to waste. The writing is so poor and the screenplay so weak that you can't help but find yourself going on a yawn streak. Without Ranveer Singh's livewire energy and a bucketful of popcorns at your mercy, this film would have been a nightmare to witness. Singh gives his utmost sincerity and he surely has his heart in the right place, but the story as indeed the direction has failed him. Jayeshbhai Jordaar: Delhi High Court Grants Release of Ranveer Singh-Starrer; Asks Makers To Add New Disclaimers.

In what can be termed as a conservative and a regressive village in Gujarat, Jayeshbhai (Ranveer Singh) wants to bring about a major change in the mindset of the people. He wants to set the right example. The stakes are too high though. His parents (Boman Irani and Ratna Pathak Shah) are against the revolution so much so that Jayeshbhai's wife Mudra (Shalini Pandey) and his 10 year old daughter need to be protected from the collective ire. In the trying circumstances will our timid and helpless hero take the leap of faith in order to empower the women of his village? Or will he hurt himself and his family in a desperate attempt to bring about the change he believes in? You have to watch the film to get the answers.

Ranveer Singh is the centerpiece of the film. He molds himself into a man who is meek and absolutely helpless. Given his stature in society and in his family, he doesn't have much say in the scheme of things. Singh gives his best to show the transition when he decides to come out of the comfort zone set by the religiously followed norms and the years of conditioning. Alas, his sincerity is not enough to salvage the script which is as weak as the man he portrays on the screen.Jayeshbhai Jordaar: Ranveer Singh Opens Up About Similarities Between His Reel and Real Character Ahead of His Film’s Release.

First of all, the film deals with too many issues at the same time, thereby the central idea somehow gets lost in the chaos. From saving the girl child to pay disparity to male chauvinism and the relentless patriarchy- the makers have too much on the platter. These issues and subtexts are interconnected, but the film fails to string them together in a coherent fashion. Ranveer tries too hard to be quirky to deliver it all, but the sloppy writing and the lame dialogues make the whole endeavor a terrible bore. Crisp and clever writing without meandering from the core issue would certainly have saved the day but that, unfortunately, isn't the case. Jayeshbhai Jordaar Review: Ranveer Singh, Shalini Pandey’s Film Receives Mixed Response From Twitterati.

Boman Irani and Ratna Pathak Shah too look like caricatures with their characters slotted into typical boxes. The lines they mouth and their dramatic moments look stretched and pretentious. The accent wavers to draw unintentional laughs. Ranveer who is the master of acquiring different accents comes across as banal and artificial in this one. While the first half of the film offers some breezy sequences, the second half becomes predictable beyond belief.

Crafted with noble intentions Jayeshbhai Jordaar fails to strike the right chords. Even Ranveer Singh's infectious zeal fails to salvage this fizzle of a film!

(The above story first appeared on LatestLY on May 13, 2022 04:09 PM IST. For more news and updates on politics, world, sports, entertainment and lifestyle, log on to our website latestly.com).