Aamir Khan is a prankster we all know. But it seems Madhuri Dixit wasn't too far behind in the same department. In a tweet, celebrating 30 years of Dil, she revealed something about that. 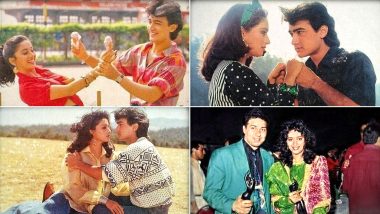 Dil completed 30 years. That's a movie which is one of our favourite 90s movies ever. Be it Aamir Khan and Madhuri Dixit's brutal rivalry or their eventual romance, or Anupam Kher's annoying miser abilities, or the music, Dil is a classic. We have often wondered how were the actors on the sets when they weren't filming. Well, Madhuri Dixit answered it a few minutes ago. She wrote how Aamir and she were scolded almost every day on the sets for being pranksters. Dil Again: Aamir Khan and Madhuri Dixit Starrer Dil To Be Remade, Confirms Indra Kumar

Madhuri supports her memory with some pictures of the lead couple from the film having fun, doing romantic scenes and also a picture of her with Sunny Deol holding the Filmfare trophies. This was Madhuri's first Filmfare for Best Actress. Sunny had picked up the best actor for Ghayal. Incidentally, both the movies had clashed at the box office and both won.

Working with @aamir_khan was so much fun! I remember how @Indra_kumar_9 gave us an earful every day for joking around & playing tricks on the sets😄 Thanks to the team's hard work & your love, the film did well & I also won my first Filmfare award. Fond memories 😇 pic.twitter.com/NC3xpwTajm

Many of Aamir's heroines have sometimes cribbed sometimes complained about his naughty nature on the sets. He loves to play tricks on his co-actors. Once a prank on Madhuri got really serious when she chased after him with a hockey stick. He had spat on her palm.

(The above story first appeared on LatestLY on Jun 22, 2020 03:12 PM IST. For more news and updates on politics, world, sports, entertainment and lifestyle, log on to our website latestly.com).