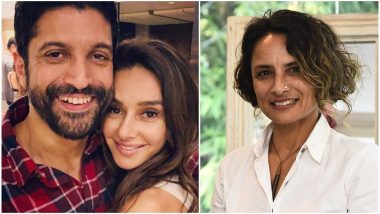 While one may expect a catfight or sharing of some cold waves between a partner's ex and current girlfriend, Adhuna Bhabani and Shibani Dandekar are far away from it or at least it seems so. Recently the two ladies were clicked enjoying a football match together and there was no animosity shared between them whatsoever. In a viral video that's making the round of internet these days, we can see Farhan Akhtar's ex and current partner enjoying the moment standing beside each other and the bond shared between them seems to be cordial enough. Shibani Dandekar Looks Super HOT in a Baby Blue Bikini in This Pic Clicked by Boyfriend Farhan Akhtar.

Of course, the ladies didn't pose for any shutterbugs nor do we say them talking but that doesn't eliminate the chances of them being cordial throughout the tournament. While Ms Dandekar was busy chatting with her friend, Adhuna was all smiles with a male friend of hers. Since the entrepreneur has already found some love in Nicolo Morea, there's no reason to have any feud. Farhan Akhtar and Shibani Dandekar’s Latest Insta Pictures Show They’re Having a Great Time by the Beach.

Watch the video of Shibani and Adhuna below

(The above story first appeared on LatestLY on Mar 10, 2019 03:26 PM IST. For more news and updates on politics, world, sports, entertainment and lifestyle, log on to our website latestly.com).