Pathan, Prithviraj, 83, Bell Bottom, RRR - Why Were Release Dates Announced in a Rushed Manner? Here's What We Found Out! (LatestLY Exclusive)

Many movies finalised release dates in the last couple of days making us wonder why are filmmakers in a rush to grab a release date. We spoke to our Trade expert and Film Producer Girish Johar who feels it is done in anticipation that state governments too will order 100% capacity after the Centre's nod a few months back. 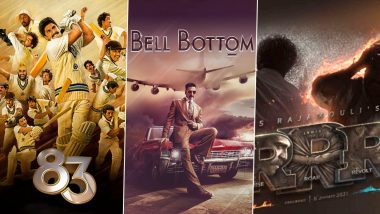 In the last couple of days, release dates have been announced one after the other. It's as if filmmakers and film studios are rushing to grab the best seat in front of the audience at the theatres. It's obviously good news for the theatres which has seen a terrible year in 2020 with no releases post March.  83, Pathan, Prithiviraj, Bell Bottom, Bhool Bhoolaiya 2, Attack, Maidaan, Shershaah, Major, Bhediya and more -the list is endless. But the quick succession in which the release dates of biggies were announced made us wonder what's the rush. Trade Expert and Film Producer, Girish Johar feels it could be because of the South effect. Ranveer Singh Starrer 83 Vs The Conjuring 3, Tom Cruise's Top Gun Vs Shershaah - Here're The Biggest Box Office Clashes Of 2021

When asked if Central Government's decision to allow 100% occupancy is the reason behind this rush to grab good dates, Johar revealed that may not be the reason. "Cinema is a state subject and they are yet to give a 100% capacity order. They are expecting the state governments to confirm it by the time the March releases happen. I would not attribute it to capacity. Maybe in anticipation, they are announcing dates. It also could be the vaccine drive, which has led to less fear in audiences. The most important factor is that the releases down South did a fantastic business. The box office is humungous as well as most of the recent releases performed very well. So this could be giving them a major impetus to finalise dates," opines Johar.

Johar agrees that it is a dicey situation what with Maharashtra seeing a rise in COVID-19 cases in the last couple of days. "But I think people are in a more confident mindset about announcing the release dates. Confident that the situation will be in control and the fact that the audience will want to come to the theatre to watch movies. It's a volatile and dynamic situation," Johar adds.

Although it's great to see movies returning to the theatres after a year of uncertainty, it remains to be seen when the states decide to agree to the Centre's order for 100% occupancy.

(The above story first appeared on LatestLY on Feb 22, 2021 03:29 PM IST. For more news and updates on politics, world, sports, entertainment and lifestyle, log on to our website latestly.com).