He is seen wearing glasses (similar to Professor) and a beige outfit. His looks and expressions got fans tweeting in the favour of casting him as the Professor already. 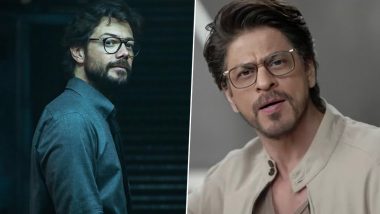 Netflix series Money Heist season 4 created a positive stir on social media. The series broke the internet with its engaging plot in the new season, opening doors wide open for the next one. This also made desi fans and portals imagine Indian actors in the major roles if remake ever happened. Of course, Shah Rukh Khan is the top pick for 'Professor's character, the lead role played by Alvaro Morte.  Now, a new bunch of pics of SRK surfaced which might just fuel this demand.

The new snaps are from the TVC of Byju's app, the education-related brand that King Khan promotes. He often changes his get-up for these ads but this one has everyone's hearts! He is seen wearing glasses (similar to Professor) and a beige outfit. His looks and expressions got fans tweeting in the favour of casting him as the Professor already. Check out the pictures and snaps below. Hina Khan Shares Ekta Kapoor’s Version of Money Heist and It’s Indeed Rib-Tickling (Watch Video).

SRK For an Ad!

He looks like professor from money heist.. even better

Earlier, there were whispers that SRK's production company is making a Hindi remake of this much-loved Spanish series. However, in his interview with Rajeev Masand, he denied the reports of being associated with any Money Heist related remake. He was quoted saying, "Nothing’s been offered to me but I am a television actor. To me, platforms don’t matter." Now that SRK hinted that he is open to any platform and he is also looking for interesting scripts, will he indeed play Professor ever?

(The above story first appeared on LatestLY on May 13, 2020 11:45 AM IST. For more news and updates on politics, world, sports, entertainment and lifestyle, log on to our website latestly.com).