One of the most important and successful films of Shammi Kapoor's career was Teesri Manzil. But he wasn't the first choice for Rocky but Dev Anand. 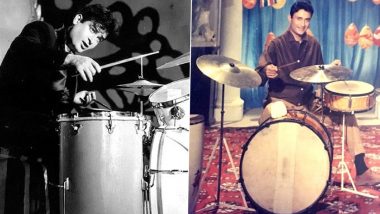 Shammi Kapoor was a one-of-kind actor. He was called the Elvis Presley of Bollywood for his strange and unique dance movements. It is said that most of the steps were choreographed by him. That could be the reason why nobody else could replicate it and even when they did, it was a poorer version. These zany dance steps and some killer songs made Shammi Kapoor a star after not getting much success initially in his career. One of the most important and successful films of his career was Teesri Manzil. Shammi Kapoor Birth Anniversary: 5 Banger Songs That Make Us Groove Even Today.

He played a drummer-singer Rocky who gets embroiled in a conspiracy. RD Burman's fantastic tunes, Asha Parekh's svelte performance and Vijay Anand's stealthy direction along with Kapoor's unique acting skills made Naseer Hussain's Teesri Manzil a must watch film. But did you know Shammi Kapoor wasn't the first choice but Dev Anand?

In fact, Dev Anand had even done the photoshoot for Teesri Manzil where he can be seen playing the drums.

Dev Anand at photo shoot for 'Teesri Manzil'. He was later replaced by Shammi Kapoor.

Aamir continued that the next day, his uncle Hussain called Vijay Anand to his office and asked him to direct Teesri Manzil. He took over Baharon Ke Sapne instead and confirmed to him that Dev Anand will not be part of the film.

(The above story first appeared on LatestLY on Oct 21, 2021 08:10 AM IST. For more news and updates on politics, world, sports, entertainment and lifestyle, log on to our website latestly.com).