This Day That Year: Alam Ara, India's First Talkie, Released On March 14, 1931 And Is Now Lost

Alam Ara, India's first talkie, released on this day in 1931 creating history. 'All singing talking, dancing' posters of the film fetched a huge audience to the theatre to watch a movie where the actors can be heard apart from just being seen. But sadly, there's no print of Alam Ara left to be viewed and revived. 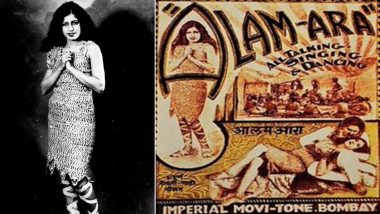 India made history on March 14, 1931, when Ardeshir Irani released the country's first talkie, Alam Ara. He got the inspiration of making it after watching the American film Show Boat. Till then India only produced silent mythological pieces which were a huge hit too. Alam Ara was based on a Parsi play and revolved around the love story of a Prince and a nomad girl. It also had Prithviraj Kapoor playing General Adil Khan. The Prince however was silent in the film as his diction was terrible and the script had to be re-written to accommodate that shortcoming. All that sounds like a great bedtime story but the worse bit is there's no print of Alam Ara left for viewing as India is not into restoration or preservation of movies. Alam Ara Clocks 88 Years: Know All About India’s First Ever Talkies Film

Filmmaker Shivendra Singh Dungarpur had told PTI a few years back, "It’s a sad commentary that we as a country have not been able to preserve even a single print of Alam Ara, not even in poorly-kept condition. Alam Ara pioneered something extraordinary and it should have been preserved like the majestic Taj Mahal.” Sadly nobody did!

Check out some pictures of Alam Ara

First Indian talkie film #AlamAra by #ArdeshirIrani made with budget of Rs 40000, featuring #MasterVithal #Zubeida and #PritvirajKapoor was released at Majestic Cinema in Mumbai on 14th March, 1931. @Rhea10 pic.twitter.com/vDW0EnqcYd

Alam Ara was a shot in a studio which was next to the railway tracks. So the film apparently was shot between 1 am to 4 am as the frequency of trains crossing was lower. So much hard work and effort...all gone to dust!

(The above story first appeared on LatestLY on Mar 14, 2021 05:34 PM IST. For more news and updates on politics, world, sports, entertainment and lifestyle, log on to our website latestly.com).