There was a time when Billie Eilish was so obsessed with Justin Bieber that she would cry for hours listening to his 2012 hit song As Long As You Love Me. Her same obsession had gotten her parents worried and they wanted her to seek therapy for the same. 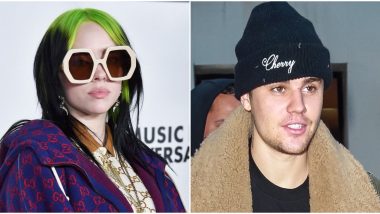 Billie Eilish's obsession with Justin Bieber isn't breaking news and we all have heard about it. However, we weren't aware of the times she'd cry listening to his song and it worried her parents so much so that they considered taking therapy lessons for her. It was during a recent episode of the singer's Apple Music radio show 'me & dad radio,' that she invited her mother to be a guest and she eventually revealed details about her obsession with Bieber. Billie Eilish Unfollows 600 People on Instagram Including Justin Bieber, Chris Brown and Ansel Elgort.

Eilish was particularly obsessed with Bieber's 2012 hit As Long As You Love Me. "I remember this one really well and the video and Billie talking about it and being excited it was coming out and just crying and crying. Everyone knows the whole Billie-Justin Bieber thing but this song was a big part of it," revealed her mother Maggie in the same conversation.

"I just want to say, we did consider taking you to therapy because you were in so much pain over Justin Bieber. It was so intense, it caused you so much pain," she further continued with Billie admitted how she'd just keep sobbing after listening to his song. Justin Bieber Files a $20 Million Lawsuit Against Two Women Who Claimed They Were His Sexual Assault Victims.

Recalling her early days and when she'd keep crying all day, Eilish said, "There was a period where I cried every single day of my life when I was like 13, 14 and 15. Every single day I cried. And 17, 18, I cried barely at all. I'm proud to say I barely cry anymore and it's one thing I've overcome." Well, certainly she has moved beyond the crying part and is more invested in creating some brilliant music these days.

(The above story first appeared on LatestLY on Jul 08, 2020 03:46 PM IST. For more news and updates on politics, world, sports, entertainment and lifestyle, log on to our website latestly.com).