Guillermo Del Toro’s Trollhunters: Rise of the Titans to Premiere on Netflix in 2021 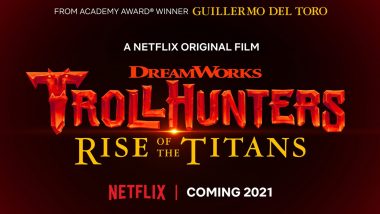 Mexican filmmaker Guillermo del Toro's much-anticipated movie 'Trollhunters: Rise of the Titans' has been scheduled to premiere in Netflix in 2021. The forthcoming animated flick, which is currently in the production stage, revolves around the world created by del Toro in his 'Tales of Arcadia' trilogy, cited Variety. The third series 'Wizards' will be debuting on Friday on Netflix. The upcoming feature is directed by Johane Matte, Franisco Ruiz Velasco and Andrew L. Schmidt from a script by Marc Guggenheim, Dan Hageman, and Kevin Hageman. Executive producers are del Toro, Guggenheim, Chad Hammes and the Hagemans. Disney’s Mulan Confirmed to Have an OTT Premiere, Will Also Release On the Big Screen in Select Few Countries

"Fortunately for us, DreamWorks Animation and Netflix both shared the very ambitious notion of doing the three series, interwoven and then finishing off with a bigger, epic-sized feature film to top it all off," Variety quoted del Toro as saying. "We wanted the feature to improve and expand but to also deliver more scope, more spectacle- more emotion too. We are very proud of the Tales of Arcadia and extremely eager to deliver this spectacular finale for the audience," the filmmaker added. Bond Girl Ana De Armas Asked to Attend No Time to Die Premiere Without Ben Affleck

The interconnecting series, first launched in 2016, is set in the fictional suburb of Arcadia, where three friends make a startling discovery that beneath their hometown lies a hidden battle between good trolls and bad. The cast of the flick includes Emile Hirsch, Lexi Medrano, Charlie Saxton, Kelsey Grammer, Alfred Molina, Steven Yeun, and others.