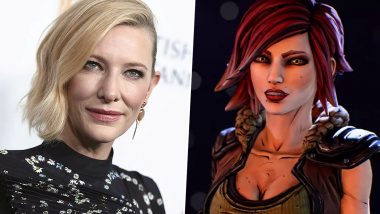 Oscar-winning actress Cate Blanchett is in talks to get on board the film adaptation of the video game ‘Borderlands. Several sources told variety.com that Blanchett is in talks to star as Lilith in the 's project. Eli Roth is on board to direct the film, Avi and Ari Arad producing through Arad Prods along with Erik Feig, who is producing via his Picturestart banner. Craig Mazin, who won an Emmy for writing the popular "Chernobyl", has penned the latest screenplay draft for the film. Dual: Karen Gillan Boards Aaron Paul, Jesse Eisenberg Starrer Sci-Fi Thriller.

If a deal is sealed, it will be another major win for the studio after teaming up with Francis Lawrence for a prequel of "Hunger Games" franchise and securing a deal with Eric Warren Singer to pen the next installment of "Now You See Me". "Borderlands" was launched in 2009, and is a role-playing first-person shooter game. It is set on the frontier of a sci-fi universe, the planet of Pandora, which has been abandoned by a mega-corporation prior to the game events. Space Force: Lisa Kudrow Boards Steve Carell’s Netflix Comedy.

Lilith is one of the main protagonists in the franchise, and one of the playable characters in the first "Borderlands" game. She is also one of only six women in the galaxy that belong to the powerful "siren" class with incredible superhuman powers.

(The above story first appeared on LatestLY on May 07, 2020 01:33 PM IST. For more news and updates on politics, world, sports, entertainment and lifestyle, log on to our website latestly.com).