Uncharted: Did You Know Mark Wahlberg Was to Play Nathan Drake Years Before Tom Holland Came on Board? 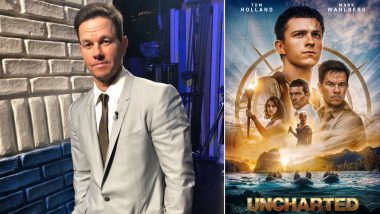 After a grueling production and being stuck in development hell for almost more than 10 years, Uncharted is finally releasing in cinemas this week. Directed by Ruben Fleischer, Uncharted stars Tom Holland as Nathan Drake and Mark Wahlberg as Victor “Sully” Sullivan. The movie sees them take on Santiago Moncada played by Antonio Banderas, who is competing with them in a race against time to find the treasure of Magellan Expedition. Uncharted Movie: Review, Cast, Plot, Trailer, Release Date - All You Need to Know About Tom Holland and Mark Wahlberg's Videogame Film Adaptation!

With Uncharted finally arriving, ends the long development of this film. Seriously, I can’t recall the last film stuck in development hell as long as this one. It’s been so long as a matter of fact that before Tom Holland was even cast in the role of Nathan Drake, our current Sully, Mark Wahlberg was going to play him. Yes, you heard it right, Mark Wahlberg was supposed to be our Nathan Drake originally.

Starting development in 2008, Uncharted was designed to be one of PlayStation’s first array into the film market. Fans originally wanted Nathan Fillion to step into the role of Nathan Drake. They even started an online campaign for it, but it sadly went nowhere, although Fillion did get to play the role eventually in a short fan film.

In 2010, it was announced that David O Russell would write and direct the film with Mark Wahlberg starring in the role Nathan Drake. Robert De Niro and Joe Pesci were also rumoured to star in the film. Uncharted was finally making headwinds. With Wahlberg cast and Russell directing it, things were looking bright, until they weren’t.

David O Russell would then exit the film at the opportunity of directing Silver Linings Playbook. With no director attached, the project reached a halt. This wouldn’t be the last halt the project would see as directors would come and go and Wahlberg’s role would be reduced to just starring in the film.

Enter Tom Holland, who was riding the high of his Spider-Man success, was cast in the role of Nathan Drake in 2017. Mark Wahlberg still being attached to the film, would fill in the role of Nate's mentor, Sully. Uncharted would then still take another three years to finally start filming as another onslaught of directors left the project over creative differences. Ruben Fleischer then was confirmed to be directing the movie and the rest is history. Uncharted: Throwback! Before Tom Holland, When Nathan Fillion Turned Nathan Drake for This Viral YouTube Short! (Watch Video).

Uncharted releases in theatres on February 18, 2022.

(The above story first appeared on LatestLY on Feb 15, 2022 09:08 PM IST. For more news and updates on politics, world, sports, entertainment and lifestyle, log on to our website latestly.com).