Turns out, Jaden was super late to the premiere of his father's film and missed the chance to be clicked at the red carpet with his famjam. 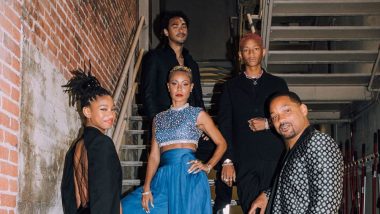 Will Smith plays the role of Genie in the live-action adaptation of Aladdin. The movie released on Friday, April 24, and its world premiere was held at El Capitan Theatre in Hollywood on May 23. The actor was accompanied by his entire family on the red carpet of the premiere. All but his youngest son, Jaden Smith. Turns out, Jaden was super late to the premiere of his father's film and missed the chance to be clicked at the red carpet with his famjam. In an Instagram video, the actor posted later, he makes it a point to troll Jaden for his lack of punctuality. Aladdin Movie Review: Guy Ritchie's Direction Takes A 'Riff Raff' Approach Towards The New Prince Of Ababwa But Will Smith As Genie Is A Compelling Swagster!

In the video, we can see the family including, Will's wife Jada Pinkett Smith, their children Willow and Jaden, and his oldest son Trey, all clicking pictures on the back alley of the theatre. Jaden insists that they click a family photo and the trolling begins. Will Smith Doesn't Watch Wife Jada Pinkett Smith's Uncensored 'Red Table Tal' Show.

“We’re in a freaking alley behind the theatre. This is not a time for a family photo!” Will said, adding, “We had the best photographers in the world waiting for us on the red carpet!”

Check out Will Smith's hilarious video below:

Hey Elon Musk, can you make Bigger Clocks in the next Tesla so @c.syresmith can be on time for my next premiere? #aladdin 📹: @westbrook

Jaden contradicted that he was only fifteen minutes late to arrive, and his father responded, "You were not,” adding pictures with a time stamp as evidence to his video.

Will's caption for the said video is also hilarious AF. He wrote, "Hey Elon Musk, can you make Bigger Clocks in the next Tesla so @c.syresmith can be on time for my next premiere?"

The reunion was also extra special because of the presence of Will's oldest son, Trey, whom he had with his first wife, Sheree Zampino. Will has opened up in the past that he regrets not spending enough time with his Trey. The actor has now made it a point to rebuild his relationship with Trey.

(The above story first appeared on LatestLY on May 24, 2019 05:58 PM IST. For more news and updates on politics, world, sports, entertainment and lifestyle, log on to our website latestly.com).