KGF Chapter 2 official teaser is finally out and as expected it is explosive. As soon as the first glimpse of the film was out, fans of the South superstar could not keep calm and went crazy. The film also stars Sanjay Dutt and Raveena Tandon. Check it out. 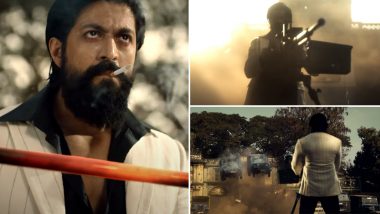 KGF Chapter 2 official teaser is finally out! Starring Yash and Sanjay Dutt in lead roles, the film was announced in 2020 and since then has been creating a lot of buzz. Also, as expected the glimpse of the flick via the teaser looks spectacular and promises a cinematic experience like never before. Must say, director Prashanth Neel indeed has the power to make fans curious and he did succeed this time too. Right from the backdrop to the costumes, we are impressed. KGF 2 rocks! Well, not just us, even fans of the superstar have gone crazy. KGF Chapter 2 Teaser: Yash And Sanjay Dutt Starrer Gets Bigger and Bolder This Time (Watch Video).

As soon as the teaser of the Yash starrer dropped online, admirers of the two stars could not keep calm and praised every bit of it. Fans could not get over Yash's look in the clip which shows him attacking the enemy all solo with the help of lightweight machine gun. Actually, KGF 2 teaser was supposed to be out on Yash's birthday(Jan 8), but as it was leaked online earlier, the makers released it a day before. Check out fans reactions below. KGF Chapter 2: Sanjay Dutt Drops a Treat for His Fans on His Birthday, Shares His Deadly Look As Adheera in the Upcoming Action Drama (View Pic).

Start of new year with a bang.#KGFChapter2Teaser was lit🔥

The fictional drama is said to revolve around the story of Rocky, played by Yash. This film is the South debut of actor Sanjay Dutt, who plays the antagonist. Bollywood actress Raveena Tandon also plays a pivotal role. Reportedly, KGF 2 will make it to the theatres this summer. Did you like the teaser? Tell us in the comment section below. Stay tuned!

(The above story first appeared on LatestLY on Jan 07, 2021 10:33 PM IST. For more news and updates on politics, world, sports, entertainment and lifestyle, log on to our website latestly.com).