Live Telecast Song Naam Indru: The Track From Kajal Aggarwal Starrer In SP Charan’s Magical Voice Is A Beautiful Melody That Can Be Heard On Loop! (Watch Video)

Live Telecast would be premiered on Disney+ Hotstar VIP on February 12. Ahead of its release, the makers have released the second song from the series titled “Naam Indru”. 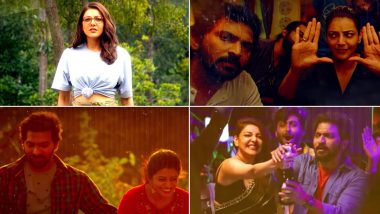 Kajal Aggarwal would be making her digital debut with the series Live Telecast, a horror series helmed by Venkat Prabhu. The actress said in a statement, “Audiences who love horror stories and otherwise are going to love this show.” Live Telecast would be premiered on Disney+ Hotstar VIP on February 12. Ahead of its release, the makers have released the second song from the series titled “Naam Indru”. It is a beautiful melody in the magical voice of SP Charan, son of late singer SP Balasubrahmanyam, a track that could be heard on loop. Live Telecast: Kajal Aggarwal’s Digital Debut Show to Stream on Disney+ Hotstar From February 12.

The song “Naam Indru” highlights various stills from the series, showcasing lead actress Kajal Aggarwal’s character Jenny’s various joyful moments with her near and dear ones. A song on the ups and downs of friendship. The series is about a TV crew, in which Jenny is the director, adamant to create a super-hit show. But in the process of making a super-hit show, they hardly realise that they all have been trapped in a haunted house controlled by supernatural powers. Live Telecast Trailer: Kajal Aggarwal's Shoot Goes Wrong When Real Ghosts Cast Themselves in Her Horror Show (Watch Video).

Live Telecast will also feature Vaibhav, Kayal Anandhi, Priyanka, Selva, Premgi Amaren and others in key roles. The trailer of the series was well-received by the audience. Let’s wait and watch what the audience have to say once the show releases.

(The above story first appeared on LatestLY on Feb 09, 2021 04:36 PM IST. For more news and updates on politics, world, sports, entertainment and lifestyle, log on to our website latestly.com).