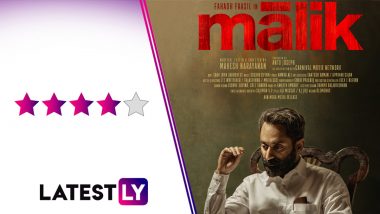 Malik Movie Review: After their past critically acclaimed ventures like Take/Off and CU Soon, director Mahesh Narayanan and actor Fahadh Faasil reunite for Malik, which is easily their most ambitious and most expensive collaboration to date. Going against the popular idea of the 'third time is always the worst', Malik doesn't disappoint at all, even if it would ruffle some feathers in the political arena. Apart from Fahadh, Malik features an ensemble cast that includes Nimisha Sajayan, Joju George, Vinay Forrt, Dileesh Pothan, Jalaja, Salim Kumar, Indrans, Divya Prabha, Dinesh Nair among others. Fahadh Faasil's Malik Skips Theatres For An Amazon Prime Release On July 15.

Inspired by real-life events, the movie focuses on Suleiman aka Ali Ikka (Fahadh Faasil), the uncrowned and undisputed leader of Ramadappali, a Muslim-dominated hamlet near Thiruvananthapuram. When we meet him first, an aging Ali, at the twilight of his reign, has renounced his illegal activities and is planning to go to Hajj. At the airport he is ambushed by the police who arrests him for a murder he has been accused of years ago.

The government also blames Ali for a riot that happened some time back. His mother (Jalaja) is ready to testify against him, the cops are planning to kill him within the prison walls and his wife Roseline (Nimisha Sajayan) is trying her best to keep him out of prison and alive.

So who is this Suleiman, whom his community seeks as their saviour, their Malik, whose mother sees as both a criminal and a good man? We are first introduced to him when he is still powerful enough that the government couldn't touch him in his 'kingdom', but has to arrest him when he steps out in years to take a pilgrimage of repentance. The first act of Malik establishes this sense of authority and his enemies before it brings us to how it all came about.

On the face of it, Malik can be construed as a regular rise of a crime-lord story that we have been so used to in cinema. The influences of classics like The Godfather (the baptism scene from the masterpiece becomes a funeral scene here, but with lasting repercussions), Nayakan, Abhimanyu, Once Upon a Time in America et al cannot be missed in the narrative.

However, what makes Malik distinct is how it uses Ali's rise to power to expose the political nexus who uses religious tensions and other tactics to destabilise a region and encroach on the locals' land. You think the dumping ground near your area is so by accident? You thought wrong. You think people start looking up to a criminal because they have lost belief in a government? Well, actually, you are right there.

The period setting of the film, as it moves from the late '60s to the '80s to the '2000's is done subtly, without making the getup of the characters look garish. The movie also includes smartly inserts real-life events to add to the authenticity of its drama, like the 2002 tsunami and how it devastated the residents living in the coastal areas.

Mahesh Narayanan also seems quite inspired by the baap of gangster dramas, Martin Scorsese, in how he treats the material. Just check out the brilliant opening sequence set in Suleiman's house, deeming with relatives and friends coming to meet him as he goes for Hajj. The use of Steadicam to snake its way to the people, establishing the relations, fractured and otherwise, the tensions and of course, the characters, is amazingly done. Of course, have to say that the first forty-five minutes of the film, that is actually part-epilogue is the film's most arresting portions, with faster flow of narrative, tense atmosphere, and a couple of unexpected shocking developments. The jugalbandi between Sanu Varghese's cinematography and Mahesh's editing makes Malik excel as a technical product. C U Soon Movie Review: Fahadh Faasil, Darshana Rajendran, Roshan Mathew Excel in This Experimental Thriller That Exposes a Horrifying Social Crime.

The Steadicam technique is used later in a couple of other 'one-shot' scenes, memorably in the riot sequence that sees a younger Suleiman trying to escape a barrage of police gunshots to retrieve his son. The way the above sequence ends is so powerful and tragic, that leaves you with a lump in your throat, and it has a lot to do with the performances of Nimisha Sajayan and Fahadh. But more on them in a bit.

Actually, let me stay with Nimisha for a while. Mahesh's treatment might have a heavy Scorsese shade (there isn't a true happy ending here), but he does something that Scorsese is often accused of not doing as much as he should - writing a strong female character.

Roseline is not just wife or a partner. More educated than her husband, she may be his sordid pillar of support during his rise up, but she is also a strong force when it comes to showing him a mirror. In the opening act itself, Roseline's grit is established, shown to be as formidable and unwavering as her husband, be it in putting a treacherous political ally (Dileesh Pothan) in place, or not bowing down to the police's uncooperative attitude. She is a woman who knows what she wants, be it making the first move on the man she loves, to standing upto him when he couldn't protect his own family. Nimisha Sajayan, who is getting more and more impressive with her every outing, breathes fire into the role, towering even beyond her co-star who headlines the film.

No, that doesn't mean Fahadh has faltered. In fact, there is a fine balance of angst and restraint in his performance that makes his character so distinct from other antiheroes we have met. His Suleiman is well-intentioned, but flawed, doesn't rely on punchlines and slo-mo massy scenes to establish his dominance. In fact, despite being a saviour for Ramadappali, Suleiman has been shown to falter, make judgemental mistakes (hinted early in a scene when he is pointed out by Roseline that he is selling smuggled perfumes at lower prices) and doesn't evaluate his true foes. And yet, he doesn't fall to the whims of machismo.  Fahadh, already a champion at essaying complex characters, gives one of his most powerful performances, bringing enough panache in every stage of his character's age-progression. His final scene with his estranged nephew (a promising Sanal Aman) reminds you of the equation that Chandu Chekavar shared with Aaromal Unni in Oru Vadakkan Veeragatha. Let's also not forget the physical commitment Fahadh put into the role, losing weight to get that lean mean look.

The supporting cast adds to the impressiveness of the film. Joju George is suitable understated as the righteous IAS officer who unfortunately comes on the wrong side of Suleiman. Vinay Forrt as Suleiman's bestie turned brother-in-law turned foe is excellent in a character with shades of grey. Jalaja, Indrans, Dileesh Pothan, Dinesh Nair, Salim Kumar are all fine in their roles. Sushin Shyam's score is nice, with the song "Theerame" staying with you long after the movie is over.

- The First and the Third Act

Malik is yet another fine offering from the deadly combo of Fahadh and Mahesh Narayanan, uplifted by its relevant political theme, Fahadh, Nimisha's fiery performances, and some terrifically shot sequences. This is definitely a must watch! Malik is streaming on Amazon Prime Video.

(The above story first appeared on LatestLY on Jul 15, 2021 12:03 AM IST. For more news and updates on politics, world, sports, entertainment and lifestyle, log on to our website latestly.com).