Naga Chaitanya Birthday: From Ye Maaya Chesave To Majili, A Look At The Best Telugu Movies Of The Handsome Hunk!

Naga Chaitanya has won hearts over the years with his performances, especially his roles in the romantic films. Today, the actor celebrates his 35th birthday and on this special occasion, let’s take a look at some his best Telugu movies. 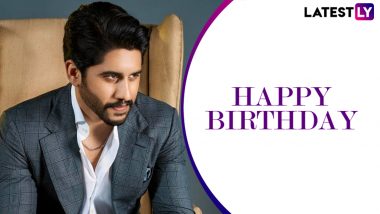 Naga Chaitanya is one of the popular and most loved actors of Telugu Cinema. The handsome hunk has won hearts over the years with his performances, especially his roles in the romantic films. Son of Nagarjuna and Lakshmi Daggubati, it was in 2009 when he had made his acting debut. It was during his second year of college when Chay (as he is fondly called by fans) expressed his desire to his father of stepping into the world of showbiz. He was then enrolled into acting classes and even took up voice and dialogue coaching before he made his acting debut. Bangarraju: Makers Unveil a New Poster From Naga Chaitanya’s Film Ahead of His Birthday, Teaser Out Tomorrow (View Pic).

Naga Chaitanya’s debut film did help him to grab audiences attention, however, it was his next movie that shot him to fame. There are numerous romantic films done by him and fans just can’t get over his works. Today, the actor celebrates his 35th birthday and on this special occasion, let’s take a look at some his best Telugu movies.

Ye Maaya Chesave – In the Gautham Menon directorial he played the role of a Hindu Telugu assistant director who falls in love with a Christian Malayali girl that was played by Samantha Ruth Prabhu. This film went on to receive cult status.

Manam – The birthday boy shared screen space with his father Nagarjuna in this fantasy drama. It’s a film dealing rebirth and eternal love concepts and showcased Chay in a dual role. This film is considered as one of the best works of the actor apart from being known for doing romantic films.

Premam – Remake of the Malayalam cult film of the same title, actresses Madonna Sebastian and Anupama Parameswaran reprised their roles from the original in this Chandoo Mondeti directorial. Shruti Haasan and Naga Chaitanya had stepped into Sai Pallavi and Nivin Pauly’s roles, respectively. This was another blockbuster film.

Saahasam Swasaga Sagipo – The Gautham Menon film might have been commercially successful, however, it had opened to positive reviews. It revolved around the life of a happy-go-lucky young man who is in love but the journey wasn’t simple as it seemed.

Majili – Naga Chaitanya and Samantha Ruth Prabhu have been one of the most loved onscreen pairs of Tollywood. This was the ex-couple’s first film after their marriage and it had turned out to be the highest-grossing film in Chay’s career.

These are some of the best works of Tollywood’s most loved actor. We wish Naga Chaitanya a very happy birthday and a wonderful year ahead!

(The above story first appeared on LatestLY on Nov 23, 2021 08:10 AM IST. For more news and updates on politics, world, sports, entertainment and lifestyle, log on to our website latestly.com).