Fans undoubtedly love to watch Naga Chaitanya on the big screen, but if his ladylove Samantha Akkineni (then Samantha Ruth Prabhu) is paired opposite to him, that turns out to be a major treat for the audience. 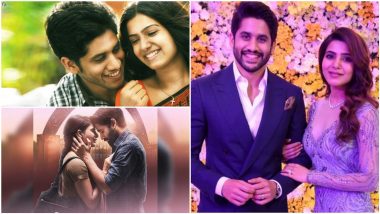 Naga Chaitanya, the charming actor of Telugu Cinema, celebrates his 34th birthday today. He is one of the most loved actors in the world of Tollywood. He has a huge fan base across the country and fans eagerly look forward to watch him on the big screen. Son of Nagarjuna Akkineni and Lakshmi Daggubati, he expressed his interest in the world of acting during his second year of college. Tollywood is indeed lucky to have a wonderful talent like him. Naga Chaitanya Dons the Pastry Chef’s Hat for Samantha Akkineni’s Birthday.

Fans undoubtedly love to watch Naga Chaitanya on the big screen, but if his ladylove Samantha Akkineni (then Samantha Ruth Prabhu) is paired opposite to him, that turns out to be a major treat for the audience. The two lovebirds, onscreen and off screen, have won audiences hearts with their chemistry. The duo dated each other for two years and in October 2017 tied the knot in a royal affair. On the occasion of Naga Chaitanya’s birthday, let’s take a look at the film in which these lovely two were featured together. Samantha Akkineni Shares Few Unseen Pics with Naga Chaitanya on Their 2nd Wedding Anniversary.

Ye Maaya Chesave – ChaySam, as this couple is fondly called, met the first time on the sets of Gautham Menon’s romantic drama. The chemistry was definitely praised, but the film also opened to positive reviews.

Autonagar Surya – It’s a political drama he played the role of a skilled mechanic and his performance was labelled as one of his best efforts. Also, one couldn’t miss the lead pair’s romance.

Manam – Samantha once again played Naga Chaitanya’s love interest in this movie. This was the third time the duo worked together in a film.

Majili – This was the first project for Naga Chaitanya and Samantha Akkineni after their marriage and Tollywood lovers were thrilled to watch the husband and wife duo on the big screen.

Oh! Baby – Naga Chaitanya did not have a full-fledged role in this comedy drama, however, his cameo appearance in this Samantha Akkineni starrer turned out to be one of the best surprises for the audience.

Fans are looking forward to many more films in which ChaySam would be featured together as a romantic pair. Here’s wishing Naga Chaitanya a very happy birthday and a fantastic year ahead!

(The above story first appeared on LatestLY on Nov 23, 2020 12:01 AM IST. For more news and updates on politics, world, sports, entertainment and lifestyle, log on to our website latestly.com).