Alia Bhatt celebrates her birthday today (March 15). And on this special occasion, the makers of her upcoming film RRR (Roudram Ranam Rudhiram) dropped the first look of the actress as Sita. Helmed by SS Rajamouli, the movie will see Alia opposite Ram Charan. 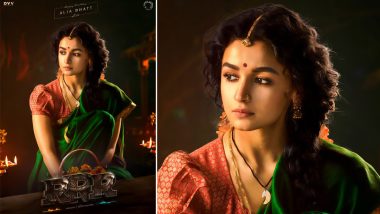 Alia Bhatt celebrates her birthday today (March 15). And on this special occasion, the makers of her upcoming film RRR (Roudram Ranam Rudhiram) dropped the first look of the actress as Sita. Helmed by SS Rajamouli, the movie will see Alia opposite Ram Charan. As soon as the actress shared her character look from the saga, she started to trend on social media. Netizens were all praises for the birthday girl as the poster sees her in an elegant avatar. RRR: Alia Bhatt’s First Look Poster as Sita in SS Rajamouli’s Magnum Opus Out on Her Birthday.

Talking about the poster, the actress as Sita is seen sitting in what looks like a temple. She can be seen wearing a green saree. The story of the flick is based in the pre-independence era where the leading men play the role of freedom fighters namely Alluri Seetharam Raju, and Komaram Bheem. Here, check out how Twitter has reacted to Alia as Sita. RRR Movie: Alia Bhatt's Look As Sita To Be Revealed On March 15.

Onwards and Upwards as they say ❤️ https://t.co/QGAvltn4LC

The sadness in her eyes.

The cuteness on her face.

The determination in her posture.

The incredible #AliaBhatt #HappyBirthdayAliaBhatt . May you continue to raise the bar of acting. Love you to the eternity and beyond.@aliaa08 ❤️❤️ https://t.co/jId4qpRuEb

Oh dang....I actually didn’t think she’d pull it off but she looks great. The South Indian/Telugu look suits her..... https://t.co/H2eWEL7Sls

Beauty and Elegance Personified. Happy Birthday To The Most Talented Yet Gorgeous.. @aliaa08 ❤️❤️❤️

She's coming with a full box of larger than life roles https://t.co/nDtGvUj19x

Can't wait to watch your stunning performance as Sita😍

What do you think of Alia's look as Sita? Meanwhile, RRR was supposed to release on July 30, 2020. However, due to coronavirus and injuries faced by the Ram Charan and Jr NTR, the shooting got pushed to a later date. Finally, the film has been back on tracks since October last year and is currently in the production phase. Stay tuned!

(The above story first appeared on LatestLY on Mar 15, 2021 02:25 PM IST. For more news and updates on politics, world, sports, entertainment and lifestyle, log on to our website latestly.com).