Vijay Sethupathi is all set to play the role of a politician in Tughlaq Durbar that is helmed by Delhiprasad Deenadayalan, marking his directorial debut. 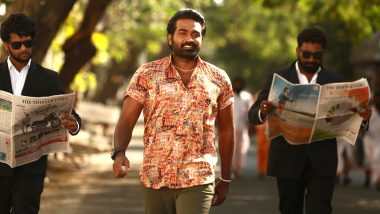 Vijay Sethupathi is all set to play the role of a politician in Tughlaq Durbar that is helmed by Delhiprasad Deenadayalan, marking his directorial debut. This political thriller is one of the most-awaited films of Sethupathi. Ever since the makers have released the actor’s intriguing look from the film, the excitement is sky-high. Now here is a treat for all fans of Vijay Sethupathi! The makers have announced that the first single titled “Annathe Sethi” from the upcoming movie is all set to be dropped online on Monday, August 3. Tughlaq Durbar: New Stills Of Makkal Selvan Vijay Sethupathi From The Upcoming Political Thriller Hit The Internet!

The poster of “Annathe Sethi” features a dynamic microphone and a golden coin. The poster also mentions that the song would be launched on Monday at 5pm. This track has been composed by Govind Vasantha. Before announcing about this track, the makers had also shared two stills of the lead actor. In one of them, Vijay Sethupathi is seen all suited up, a black tailored suit, whereas in the other pic, he is seen in a bright printed half sleeve shirt. These two different looks of Sethupathi is impressive. Tughlaq Durbar First Look: Vijay Sethupathi Will Colour You Intrigued With the Poster of His Political Thriller.

#TughlaqDurbar - FIRST SINGLE - ANNOUNCEMENT at 10am 🥁🥁

(The above story first appeared on LatestLY on Jul 31, 2020 10:50 AM IST. For more news and updates on politics, world, sports, entertainment and lifestyle, log on to our website latestly.com).