Tiger Shroff turns 31 today and on his special day we decided to walk down the memory lane to recall a moment when dad Jackie Shroff had surprised everyone by taking the baby Tiger Shroff on the stage to receive his Filmfare Award for the film Parinda back in 1989. 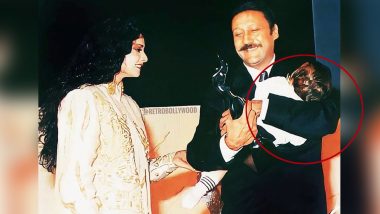 Tiger Shroff turns 31 today and on his special day we decided to walk down the memory lane to recall a moment when dad Jackie Shroff had surprised everyone by taking the baby Tiger Shroff on the stage to receive his Filmfare Award for the film Parinda back in 1989. Veteran actress Rekha who handed the trophy to Jackie was surprised to see the bundle of cuteness in Jackie's hand. Her expressions say it all!

The lump in Jackie's throat was unmissable as he went to receive the black lady. An emotional Jackie thanked director Subhash Ghai and Vidhu Vinod Chopra for introducing him to the film industry. He also thanked co-actor Anil Kapoor for suggesting this role to him. Take a look at the video below to witness the magical moment! Tiger Shroff Turns 31: Alia Bhatt, Disha Patani, Katrina Kaif and Others Extend Birthday Greetings for the Action Hunk

Tiger has certainly come a long way in his journey that kicked off in 2014 and paving his own way to the glory he hasn't shied away from learning, improvising and growing with each film he does. He stands tall today amongst his contemporaries with 3 franchises under his belt. He made his debut with 'Heropanti' and now is working on the second part of the same franchise, the film titled 'Heropanti 2'.

Another franchise that has reached on the fourth part is Baaghi, the previous part released in 2020 and was also the last film to screen in theatres before the lockdown. Interestingly, in a very brief span the numbers at the box office were soaring skies. His recently announced film, Ganapath is also a franchise film that will put the actor in a different focus light altogether. Speculated to be the most unique role Tiger has ever played, this franchise will also prove to be successful with his earnest efforts. Look at this feat, he can easily be titled as 'The Franchise King' of B-town. Tiger Shroff Birthday Special: From Heropanti 2 to Ganapath Part I, Every Upcoming Movie of the Bollywood Action Star

If films weren't enough, Tiger ventured into a new space altogether - Music. Within a span of few months, Tiger presented two singles. 'Unbelievable' and 'Casanova' have both been a hot favourite for the listeners and it's only right to say how Tiger Shroff has managed to unleash his talent and ace it with all his might.

(The above story first appeared on LatestLY on Mar 02, 2021 07:08 PM IST. For more news and updates on politics, world, sports, entertainment and lifestyle, log on to our website latestly.com).