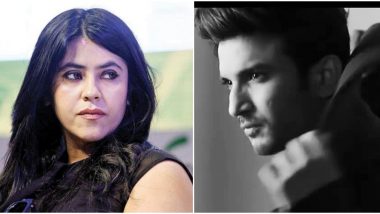 The untimely demise of Sushant Singh Rajput has left everyone from the world of TV as well as Bollywood in a state of shock. The young talent who was just 34 died by suicide. His last rites were performed in Mumbai wherein only selected bunch of celebrities were spotted to pay their last respects to the late actor. From the time this tragic news of Sushant no more hit the web, fans, as well as fraternity pals, could not believe it. Reports are his ex Ankita Lokhande is devastated after the actor's death. Amidst all this, we hear that the queen of soaps, Ekta Kapoor has some plans. Sushant Singh Rajput Official Website to Share Positive Energies and Memories the Late Actor Left Behind.

As per a report in Spotboye, Ekta is apparently going to host a prayer meet for Sushant Singh on Thursday, June 18. For the unaware, it was Kapoor who made Sushant a star by giving him his first break opposite Ankita in Zee TV's serial, Pavitra Rishta. Sushant as Manav on the small screen won hearts and in no time became a fan favourite.

"Invites are being made and will be circulated soon. Many known faces from the entertainment industry are said to be attending the prayer meet," a source told to the portal. Sushant Singh Rajput Death: Case Filed Against Karan Johar, Salman Khan, Sanjay Leela Bhansali, Ekta Kapoor In Muzaffarpur Court.

Meanwhile, as per a recent report a case has been filed against Bollywood producers and filmmakers, Karan Johar, Sanjay Leela Bhansali, Ekta Kapoor and actor Salman Khan with regards to Sushant Singh Rajput’s suicide. To which Ekta has even reacted sarcastically and slammed the mindsets for targetting the showbiz. May Sushant's soul rest in peace. Stay tuned!

(The above story first appeared on LatestLY on Jun 17, 2020 04:32 PM IST. For more news and updates on politics, world, sports, entertainment and lifestyle, log on to our website latestly.com).