The story of pyaar and revenge will be carried forward by the reincarnated versions starring Surbhi Chandna as Bani, Mohit Sehgal as Jay and the villain Sharad Malhotra as Veer. Check it out. 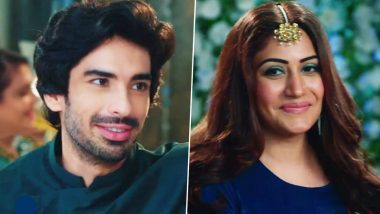 Ekta Kapoor's supernatural series Naagin 5 has been one of the highly anticipated shows ever. Before the latest season's first episode got aired a lot of speculations were made about who will play the new Naagin. However, it was Hina Khan as the Sarvashresth Adi serpent, Mohit Malhotra as her lover boy Hriday and antagonist Dheeraj Dhoopar as Cheel Aakesh, who surprised one and all with their twisted saga. But sadly, these three were there only for quite a short role on the show. As the story of pyaar and revenge will be carried forward by their reincarnated forms starring Surbhi Chandna as Bani, Mohit Sehgal as Jay and the villain Sharad Malhotra as Veer. Naagin 5: Mohit Sehgal Joins Surbhi Chandna and Sharad Malhotra In Ekta Kapoor's Supernatural Show?

Recently, the episode featuring the Surbhi, Mohit and Sharad was out and it received a thunderous response. Netizens could not keep calm and hailed Mohit and Surbhi as a fresh pair. Not just this, the storyline of the show was also praised by fans. Having said that, the earlier seasons of the Naagin franchise have seen some stunning pairs like Arjun Bijlani-Mouni Roy, Karanvir Bohra-Mouni Roy, Surbhi Jyoti-Pearl V Puri and Nia Sharma-Vijayendra Kumeria. So, will Surbhi and Mohit be able to bring the magic onscreen? For the same reason, we want you to vote and give a verdict. Naagin 5: First Glimpse Of Surbhi Chandna Post Leap is Out Now (Watch Video).

Cast Your Vote Below:

How Did You Like The Pairing Of Surbhi Chandna and Mohit Sehgal In Naagin 5?

If you ask us, we think it's too early to predict how Jay and Bani will weave magic on the screen. But if we had to say something about their first glimpse together, it looked cute and sparkling. Meanwhile, on the work front, Surbhi Chandna was last seen in Star Plus' serial Sanjivani 2 as Dr. Ishaani whereas Mohit Sehgal was seen in Love Ka Hai Intezaar. Stay tuned!

(The above story first appeared on LatestLY on Aug 18, 2020 05:06 PM IST. For more news and updates on politics, world, sports, entertainment and lifestyle, log on to our website latestly.com).