Ramayan To Be Dubbed In Bengali and Marathi: Here's When and Where You Can Watch This Arun Govil-Dipika Chikhlia’s Mythological Show In Regional Languages On TV (View Tweets)

After impressing fans with Ramayan in Hindi, now the mythological show will also make its way in Bengali and Marathi. Check it out. 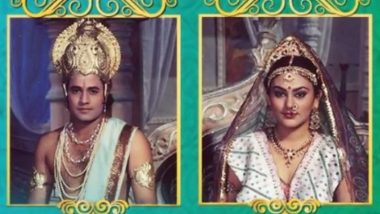 Ramayan To Be Dubbed Marathi and Bengali (Photo Credits: Twitter)

Ramanand Sagar's 'Ramayan' which stars Arun Govil (Ram), Dipika Chikhlia (Sita), Sunil Lahri (Lakshman) and Arvind Trivedi (Ravan) in key roles is still considered to be one of the iconic shows created ever. The mythological show's re-run amid the lockdown churned great TRP and in no time the show became one of the most-watched. 'Ramayan' had witnessed a viewership of 7.7 Cr worldwide, as reported by Doordarshan. And seems like the fever will still continue, as after impressing the Hindi audience, the epic show is all set for a Bengali and Marathi version. Ramayan on Star Plus and Mahabharat on Colors: Here's The Telecast Time and Schedule for the Re-Run of the Doordarshan Shows (View Tweets).

Well, and just incase you are curious about the telecast of the show in regional languages but do not know which channel it'll air on, fret not, as we've got your covered. Ramayan: When A Delhi-Patna Train Made An Unscheduled Halt At Rampur For Passengers To Watch Ramanand Sagar's Mythological Show.

When and Where To Watch Ramayan In Bengali:

FYI, the show's Bengali version will be making its way on June 1, 2020, and will air on Star Jalsha at 8 pm everyday.

When and Where To Watch Ramayan In Marathi:

For the uninitiated, 'Ramayan' initially aired on Doordarshan in the year 1987, but its the show's re-telecast which made it super popular and also part of every household. Just in case, you missed the re-run of mytho show on DD National in Hindi, you can still watch it on Star Plus at 7.30 pm. Stay tuned to LatestLY!

(The above story first appeared on LatestLY on May 26, 2020 10:14 PM IST. For more news and updates on politics, world, sports, entertainment and lifestyle, log on to our website latestly.com).